See more additional table and statistic about the whole mobile vendors
Posted by Ron at 4:30 AM 1 comment: 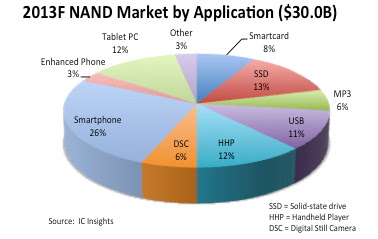 The Smartphones, Tablet PCs, SSDs Propelling NAND Flash Sales in 2013 report  discusses the percentages of NAND sales to the various end markets.  NAND demand is being impacted quite a bit by the growth of tablets that are replacing laptops.   iPad market grew fast and the pc makers have been marketing and testing out various tablet forms that are gaining acceptance.  Tablets are expected to reach 12% of the $30.0 Billion NAND flash market in 2013.  In addition, every Tablet has an SSD storage, so the growth of Tablets will lead to increased demand of SSDs.

Ron
Insightful, timely, and accurate semiconductor consulting.Semiconductor information and news at - www.maltiel-consulting.com
Posted by Ron at 4:30 AM No comments:

While it is useful to include foundries in sales ranking, still Sandisk is not listed in the ranking.

http://www.eetimes.com/electronics-news/441084/Qualcomm-GloFo-are-stars-of-2012-chip-supplier-ranking
IDMs and fab-lite companies suffer as pure-play fabless and foundry companies are the star performers in a 2012 ranking of chip suppliers from IC Insights. LONDON – A ranking of the top 25 worldwide semiconductor companies by sales, covering ICs optoelectronics, sensors and discrete devices, from market research firm IC Insights shows that Globalfoundries increased sales by 31 percent and Qualcomm by 30 percent. Qualcomm broke into the top five (see figure 1 below).Foundry TSMC remained in third place but increased sales by 18 percent getting closer to Samsung and Intel, which both saw sales decline. Although both Samsung and Intel are making first steps to enter the foundry business the former was weighed down with memory sales and the latter with a focus on processors for the lackluster PC market.In total, the top 25 semiconductor companies’ sales declined by 1 percent in 2012, two points less than the total worldwide semiconductor market decline of 3 percent.By geography the top 25 includes 10 suppliers headquartered in the U.S., seven in Japan, three in Taiwan, three in Europe, and two in South Korea.

Click on image to enlarge.
2012 top 25 semiconductor suppliers ranked by sales ($millions, including foundries).Same companies, different order, ranked by annual growthIC Insights has also supplied a ranking of the same 25 companies ranked by annual growth (see figure 2 below). It is notable that lower order of that ranking filled with companies that experienced a double-digit percentage fall in sales includes a number of European and Japanese companies. It is notable that GlobalFoundries with a 31 percent increase in sales and AMD with a 17 percent decline are at opposite ends of that ranking in 2012. AMD was the original parent of Globalfoundries and has been its primary customer. IC Insights interprets the success as an indication that Globalfoundries has achieved success in attracting additional IC foundry customers such as STMicroelectronics, Freescale, Qualcomm and others.The inclusion of foundries in such rankings is contentious because it means that some sales are double counted – from foundry to fabless chip company and then from fabless chip company to customer. However, IC Insights said that in a forthcoming update to The McClean Report, marketshare rankings of IC suppliers by product type will also be presented and foundries are excluded from these rankings.

2012 top 25 semiconductor companies by sales ranked by annual growth ($millions, including foundries).
Posted by Ron at 9:34 AM No comments: