Surprise, Samsung's A9 Processor is 9% Smaller than TSMC''s in iPhone 6s

Apple is using both Samsung and TSMC to fabricate the microprocessor for the new iPhone 6 and 6s (see the article below). A second source is typically used to cut down the risk of depending on only one fab for key component.  It is very interesting that the die size of Samsung is 96 mm2 while TSMC die size is 8.85% larger at 104.5 mm2.

Apple improved the approach of using a second source. It implemented two versions at the same time. When you develop new complex products such as A9 with an embedding mobile processor inside A9 , there are risks that the new processor would not work. By using one design at TSMC, and a shrunk version at Samsung, Apple got ahead on the learning curve. It gave Apple a chance to implement improvement while shrinking the die. In addition, the shrunk die at Samsung reduces the cost of the A9 die.

It will be interesting to know if there are some performance differences between Samsung and TSMC versions.

Chipworks: Both Samsung and TSMC are making the A9 chip for Apple

And the Samsung version is smaller than the TSMC version.


The only thing that most people will need to know about Apple's A9 is that it's a whole lot faster than last year's A8. But for those of you who are more interested in chip design, Chipworks has unearthed an interesting tidbit: there are two different versions of the A9 chip, one manufactured by Samsung and another by Taiwan Semiconductor (TSMC). Most interestingly, Samsung's version (the APL0898) has a slightly smaller footprint than the TSMC version (APL1022).
There have long been rumors that Apple was dual-sourcing the A8 from Samsung and TSMC, but this is the first visual proof that we've seen of the practice. iPhone and iPad processors up to and including the A7 were all made by Samsung.
Apple buys other parts from multiple sources including NAND flash and RAM, but the SoC is a major component with bigger implications for performance and power. Chipworks promises a more in-depth look at how the two processors are different, but for now, all we know is that they differ in size.
We have no way to confirm whether the chips in our review samples were made by Samsung or TSMC. iFixit's teardowns found the Samsung version of the A9 in the iPhone 6S and TSMC's version in the iPhone 6S Plus, which makes sense—a larger phone has more room to spare for a larger chip—but that doesn't necessarily mean that all of the phones are being put together this way. In our testing, both the iPhone 6S and 6S Plus benchmarked nearly identically, and both behaved well during Geekbench's thermal throttling test.
Posted by Ron at 8:21 AM No comments: 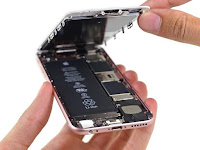 The new iPhone is a fast phone. The iPhone tear-down detailed below reveals that the processor A9 is packaged together with the mobility processor M9. "A9 package itself appears bigger—roughly 14.5 x 15 mm, up from 13.5 x 14.5 mm on the A8. That could represent a smaller die plus the addition of the embedded M9"

In addition, increasing the DRAM size to 2GB  LPDDR4 DRAM , also increase the speed of the phone by providing additional storage enabling more operations to occur at the same time in parallel.

It is also interesting that the battery "1715 mAh. It's a small but notable decrease from the 1810 mAh battery in last year's iPhone 6 "  is smaller. Using one package for A9 and M9 processors, and a larger LPDDR4 DRAM help to reduce power consumption.