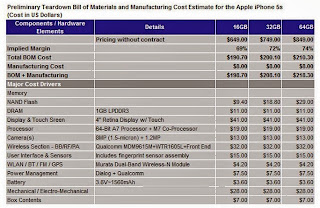 Higher prices for higher-end phonesThe combined BOM and manufacturing cost for the midrange iPhone 5s with 32 GB of NAND flash is estimated at $208. The 64-GB model’s cost totals $218.
Posted by Ron at 6:55 AM No comments: