Apple A8 (Next Processor Chip) 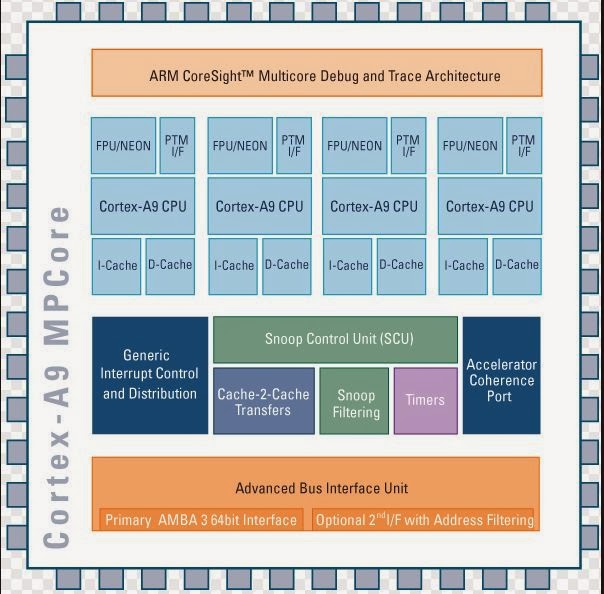 The article below (and at the link) provides general background about Apple’s A8 competitive advantages.  Key benefits can be gleaned from Apples purchases of small companies (see September 2013 How Apple Leverages its R&D) would be an easier implementation of;

The move to 64-bit has been years in the making. But we did it because we wanted to put desktop-class processing power in the palm of people's hands. - Apple iPhone 5s design web page [emphasis added]
I began my article on the A7 chip from Apple (AAPL) with this quote from CEO Tim Cook, More...
Posted by Ron at 7:08 AM No comments:

The concentration of the number of companies producing chips continue due to increasing cost of developing leading edge semiconductor manufacturing technology. The article below documents this evolution.

"there are only about 15 companies that comprise the entire future total available market (TAM) for leading-edge IC fabrication equipment and materials.  When 450mm wafer fabrication technology comes into production, this manufacturer group is predicted to shrink even further to a maximum of just 10 companies."

A ranking of the industry’s 10 largest IC manufacturers in terms of installed capacity is provided in Figure 1. Included in the list are four from North America, two companies from South Korea, two from Taiwan, and one each from Europe and Japan.

As of December 2013, Samsung had the most installed wafer capacity with nearly 1.9 million 200mm-equivalent wafers per month!  That represented 12.6% of the world’s total capacity and most of it used for the fabrication of DRAM and flash memory devices.  Next in line was the largest pure-play foundry in the world TSMC with about 1.5 million wafers per month capacity, or 10.0% of total worldwide capacity.  Following TSMC were memory IC suppliers Micron, Toshiba/SanDisk, and SK Hynix.

In January 2013, Micron and Nanya amended their Inotera partnership such that Micron now takes 95% of Inotera’s wafer output.  Previously, Micron and Nanya evenly split Inotera’s capacity.  Then, in July 2013, Micron finally closed the deal on its acquisition of Elpida Memory and the Rexchip business in Taiwan that Elpida operated in partnership with Powerchip.  It took Micron a full year to complete the purchase after several delays with getting approvals from bondholders and governments.  With the addition of the Elpida and Rexchip fabs as well as the extra Inotera capacity, Micron became the third-largest wafer capacity holder in the world in 2013 with nearly 1.4 million 200mm-equivalent wafers per month (9.3% of total worldwide capacity).  At the end of 2012, Micron had the sixth-largest amount of wafer capacity.

The three largest pure-play foundries—TSMC, GlobalFoundries, and UMC—are ranked in the top 10 listing of capacity leaders.  In total, these three companies have held about 80% of the worldwide pure-play foundry market since 2010.  Moreover, these three foundries had a combined capacity of about 2.5 million wafers per month as of December 2013, representing about 17% of the total fab capacity in the world.
The combined capacity of the top-5 leaders accounted for 47% of total worldwide capacity in Dec-2013.  At the same time, just over two-thirds (67%) of the world’s capacity was represented by the combined capacity of the top-10 leaders, while the top 15 accounted for 76% and the top 25, 85%, of worldwide installed IC capacity in Dec-2013.  It should be noted that the shares of these groups have each increased significantly since 2009.  The top-5 group gained 11 percentage points; the top-10 group, 13 points; the top-15 group, 12 points; and the top-25 group, seven points. Those are big gains over the course of just four years!

IC manufacturing is increasingly becoming a high stakes poker game with enormous up-front costs.  Today, it costs $4.0-$5.0 billion for a high-volume state-of-the-art 300mm wafer fab and the cost to build tomorrow’s 450mm wafer fab will probably be double that.  Despite the cost-per-unit area advantage that larger wafers provide, there are fewer and fewer companies willing and able to continue investing that kind of money.

IC Insights believes that the capacity shares of the top 5, 10, 15, and 25 leaders will continue to increase over the next several years as the big get bigger, middle-tier manufacturers merge to consolidate resources and improve competitiveness, and a greater number of mid- to small-size companies move away from in-house IC fabrication and move toward using third-party foundries.

Rankings of IC manufacturers by installed capacity for each of the wafer sizes are shown in Figure 2.  Looking at the ranking for 300mm wafer capacity, it is not surprising that the list includes only DRAM and flash memory suppliers like Samsung, Toshiba, Micron, SK Hynix, and Nanya; the industry’s biggest IC manufacturer and dominant MPU supplier Intel; and the world’s three largest pure-play foundries TSMC, GlobalFoundries, and UMC.  These companies offer the types of ICs that benefit most from using the largest wafer size available to best amortize the manufacturing cost per die.  The ranking for the smaller wafer sizes (i.e., ≤150mm) includes a more diversified group of companies.

A significant trend with regard to the industry’s IC manufacturing base, and a worrisome one from the perspective of companies that supply equipment and materials to chip makers, is that as the industry moves IC fabrication onto larger wafers in bigger fabs, the group of IC manufacturers continues to shrink in number.  There are just 36% the number of companies that own and operate 300mm wafer fabs than 200mm fabs and the distribution of worldwide 300mm wafer capacity among those manufacturers is very top-heavy.  Essentially, there are only about 15 companies that comprise the entire future total available market (TAM) for leading-edge IC fabrication equipment and materials.  When 450mm wafer fabrication technology comes into production, this manufacturer group is predicted to shrink even further to a maximum of just 10 companies.
Posted by Ron at 8:44 AM No comments: 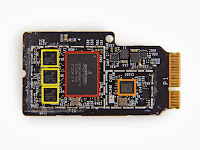 iFixit took apart Mac Pro (see the article below) and it will make many semiconductor companies happy.

"The system is packed with high-end components, including:

After making its debut during the WWDC 2013 Keynote, the reimagined, reformulated Mac Pro finally arrived at iFixit's doorstep. Join us as we turn the (very) Late 2013 Mac Pro inside-out.


·         Contrary to popular belief, the new Mac Pro is closer in design to an aluminum beverage can than a trash can. (Not that there's anything wrong with trash cans—some of our favorite astromech droids areshaped like trash cans.)


·         The back side (if a cylinder can have a back side) contains the power button and electrical inlet, as well as a tidy array of ports:


·         Looks like neither trash nor fixer can get in through the top of this bin. Time to investigate that enticing lock switch...


·         What other improved repairability features will we find in this  desktop computer? Only time and spudgers will tell.


·         With the cylindrical cover removed, we get our first peek inside the Mac Pro.


·         The dual graphics cards dominate the initial view. Their symmetry is broken only by the SSD cage nestled up alongside the second graphics card.


·         Giving the Mac Pro a little spin, we find neatly positioned vertical RAM slots at either side of the I/O panel.


o    For those playing along at home, we have only removed one screw, and the SSD is out. (Side note: the screw wasn't even proprietary!)


·         This combination of hardware makes the Mac Pro's SSD suspiciously similar to those we've seen in the latest refresh of MacBook Pro Retina and MacBook Air.


o    To the point that only the last few digits of the model numbers are any different. Hmmm...


·         Regulatory markings have been relegated to the bottom cover/air inlet, where we find a few more informative tidbits:


·         There can only be one fan. The Mac Pro is vented by a single fan, which pulls air from under the case, through the core, and out the top of the case.


·         Teardown update: You asked, we answered. We popped the plastic roof off the fan module and found a whole new stash of precision engineering.


·         Snug in a nest of antennas, the AirPort card fits onto a small adapter board that also connects to the fan below.


·         Those three large screws secure the fan, with vibration-dampening rubber bumpers, like we've seen in iMacs.


·         More deja vu as we uncap the AirPort card and find what looks to be the same configuration found in most Apple products today:


·         We noticed a few cavities around the edges of the impeller filled with some sort of epoxy (on both sides). We suspect it's for fine-tuned balancing, to keep the fan running smooth and quiet.


·         A view from above: The Mac Pro utilizes a giant triangular heat sink ("Thermal Core"), shared by the dual graphics cards and CPU.


·         Looks like the Mac Pro has taken some design pointers from the recent AirPort Extreme and Time Capsule bodies: a thin, vertical design with individual boards on separate sides.


·         We use our spudger to pry the graphics card data connectors from their sockets. This FCI Meg-Array connector is the same type used for the G4 & G5 PowerPC processor daughtercards, and looks to be a fully custom way of hooking up PCI-E, with many pins in a pressed-in connector.


·         With the Mac Pro's structure dominated by the central heat sink, we'd best start by peeling parts off.


·         Amidst the usual processing power and cost comparison with a similar home-built desktop PC, these graphics cards may be the key to Apple finally undercutting homebrew systems on a pure power basis.


·         While this stacks up fairly well for current Apple GPU offerings, the proprietary nature, and lack of an elegant external GPU option, may age this device before its time.


·         This GPU—same make and model—hails from Taiwan, unlike its Chinese-made twin.


·         The other important difference to note is that this card (and only this card) hosts the slot for the SSD. This seems to us like a potential opportunity for expansion—perhaps higher storage configurations make use of two of this variety, for doubling up on SSDs?


·         A novel disc-shaped daughterboard ties everything together at the base of the machine. Having spudgered away the ribbon cables, we flip it over for a closer look.


·         Dominated by inscrutable proprietary connectors, we can only hope the ICs on this interconnect board will tell us more about its purpose.


·         The logic board, dual graphics cards, and I/O port board all connect to this single board.


·         Pulling up a black cover grille, we discover where Apple hid the power supply: it's sandwiched between the I/O panel and the logic board.


·         The power supply's connecting cables are cleverly conceived, but a bit tricky to remove. Our handy Torx driver is helpful here...


·         The logic board is the next logical step. The CPU is the last to go, left clinging to the side of the heat sink via a thin smear of thermal paste.


·         And a quick look at what's left on the behemoth of a heat sink: Heavy gauge, flat power cables run from the PSU to the logic board and graphics cards, and remain intertwined in the heat sink.


·         With the I/O panel cover belly-up, we spot one last trio of unidentified ICs, labeled as follows:


·         For being so compact, the design is surprisingly modular and easy to disassemble. Non-proprietary Torx screws are used throughout, and several components can be replaced independently.


·         While it will require a bit of digging, the CPU is user-replaceable—meaning intrepid fixers should be able to save considerably by upgrading from the base-level processor configuration.


·         There is no room, or available port, for adding your own internal storage. Apple has addressed this with heaps of Thunderbolt, but we'd personally rather use the more widely compatible SATA if we could.


·         With some proprietary new connectors and tight cable routing, working on this $3,000 device without a repair manual could be risky.
Posted by Ron at 8:54 AM No comments: