Similarly, MediaTek, a chipset manufacturer based out of Taiwan, has been making some huge moves lately. Just over two months ago, it came out with the "world's first true octa-core" processor, which consisted of eight Cortex-A7 cores capable of operating simultaneously. Now that ARM has announced Cortex-A17 technology, (see second article below).


The Snapdragon 610 will be equipped with four ARM Cortex A53 CPU cores running at an unspecified clock speed, rather than one of Qualcomm's custom ARM architectures. Snapdragon 615 takes a classic more-is-better approach, adding four more Cortex A53 CPU cores to the 610 for a total of eight. (Update:According to AnandTech, each group of four cores in the Snapdragon 615 will be optimized for a different performance level. One group will offer faster performance and one will offer lower power consumption, but both groups can theoretically be active at the same time.) For reference, the original Snapdragon 600 included four 32-bit Krait 300 CPU cores running at 1.7 or 1.9GHz, depending on the specific model.Qualcomm's first 64-bit chip wasn't a record-breaking high-end Snapdragon, but rather the modest, mid-range Snapdragon 410. Today at the Mobile World Congress in Barcelona, the company announced its next two 64-bit mobile SoCs, the Snapdragon 610 and 615. Rather than introducing 64-bit at the top of its product lineup and letting it trickle down, Qualcomm seems to be taking the opposite approach.
The list of CPU architectures that ARM offers is getting difficult to keep track of, but here's what you need to know: Cortex A53 is a replacement of sorts for the Cortex A7. It's the first of two CPU designs from ARM that supports the new, more efficient ARMv8 instruction set and, by extension, the traditional benefits of a 64-bit architecture (not all ARMv8 chips are 64-bit, but everything we've seen so far has been). Cortex A7 and A53 are both small cores designed for low power rather than high performance, which means that Snapdragon 610 and 615 may actually be slower than last year's Snapdragon 600 for many tasks. For software that can use all of the CPU cores at once, it's possible that the eight-core 615 will be able to gain an edge, but the CPUs will likely be more remarkable for their ARMv8 support than their raw performance.
Luckily for Qualcomm, the chips' custom GPUs and LTE modems will be more compelling for partners and consumers (and will differentiate the 610 and 615 from theSnapdragon 410, which also uses four Cortex A53 CPU cores). The Adreno 405 GPU is a relative of the Adreno 420 in the upcoming Snapdragon 805, and while it will probably be a little slower, it still supports OpenGL ES 3.0 (also included in Adreno 300 GPUs), DirectX 11.2 (good for Windows phones), H.265 video decoding, and displays up to 2560×1600 in resolution.
On the wireless side, the 610 and 615 support LTE speeds of up to 150Mbps and are compatible with Qualcomm's "RF360 Front End Solution," which allows phone manufacturers to support multiple worldwide LTE bands with a single phone rather than having to customize multiple configurations for different markets. Bluetooth 4.1 and 802.11ac Wi-Fi are also included.
Qualcomm says that the 410, 610, and 615 will all be supported by the same software and will be pin-compatible, meaning that any phone designed for one of these three chips can be upgraded or downgraded at will. This should be handy for OEMs looking to spruce up an older handset, or phone-makers who want to experiment a bit to find the best balance between performance, power consumption, and cost.
Both the Snapdragon 610 and 615 are scheduled to begin sampling in the third quarter of 2014 and will appear in shipping phones and tablets in the fourth quarter; the Snapdragon 410 and 805 are scheduled to be released in a similar timeframe. Those of you waiting for a true high-end 64-bit part from Qualcomm will have to keep waiting. The new-ish Snapdragon 801 and the Snapdragon 805 will be the company's flagship SoCs through the end of 2014, but by the end of the year we'd expect to hear something about some kind of 64-bit Snapdragon 810-series part based on either the high-performance Cortex A57 architecture or a new version of Qualcomm's custom Krait architecture.

MediaTek, a chipset manufacturer based out of Taiwan, has been making some huge moves lately. Just over two months ago, it came out with the "world's first true octa-core" processor, which consisted of eight Cortex-A7 cores capable of operating simultaneously. Now that ARM has announced Cortex-A17 technology, however, MediaTek is ready to start sampling a new octa-core chip that consists of four 2.2-2.5GHz A17 cores and four 1.7GHz A7s, and comes with a Rogue PowerVR Series6 GPU to take care of any graphical needs you might have.
As an aside, the A17 cores come with a 60 percent improvement in performance over the current-gen A9s, and are primarily designed to make midrange smartphones and tablets even faster. That said, MediaTek tells us that its new chips, known as the MT6595, are actually meant to be featured in premium devices and will square off directly against Qualcomm's Snapdragon 800 and 805. And it's certainly got a few noteworthy features: first, the chip will use ARM's big.LITTLE architecture and Heterogeneous Multi-Processing, which means you can use all eight cores for the most intense tasks, or you can use just one or two at a time for incredibly basic activities. The company claims that this chip will be faster and more power efficient than the octa-core Exynos options, which feature four A15 cores and four A7s at lower frequencies.
Additionally, the MT6595 claims to be the first octa-core LTE system-on-chip with an H.265 Ultra HD Codec built-in to the platform, which offers 4K2K video recording and playback capabilities. In much the same way that most manufacturers don't enable all of a chip's features, however, it'll be up to each individual company to add it in. The chips will begin sampling to phone makers and carriers in the first half of this year, and it's expected to arrive in products during the second half. And while it should find its way into smartphones and tablets around the world, MediaTek wants the MT6595 to enjoy a huge presence in the US.
Posted by Ron at 8:31 AM No comments: 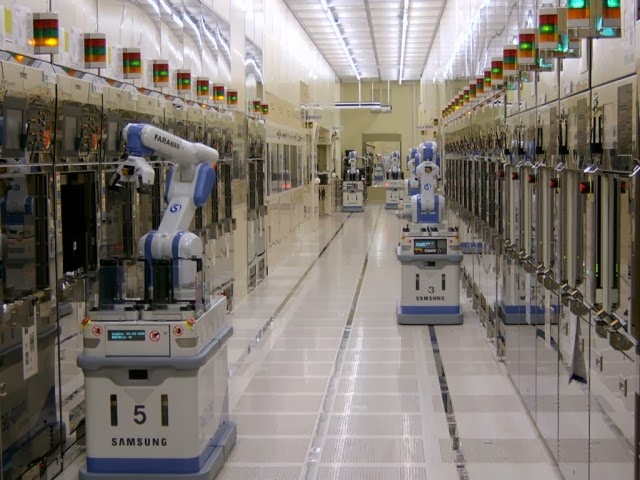 The article below discuss IBM announcement that it is selling its manufacturing operations. It will impact SOI (Silicon on Insulator), a process  that IBM specialized in.

It is not likely that Intel will buy an existing fab. Intel always duplicates an existing process in a current fab when they build a new fab

It is just another example of consolidation chip manufacturing see in March 2012 Moore's Law End? (Next semiconductors gen. cost $10 billion
" chip industry without IBM will be a diminished industry."

david manners
Following the semiconductor shock of IBM pulling out of chip manufacturing, David Manners considers who could buy and run the IBM fabs, whose processes include SOI and SiGe, and which supply manufacturing process technology to half the world’s major companies: Samsung, GloFo, UMC, ST, Renesas, NEC, Freescale, Toshiba and Infineon.
The biggest shockwave the semiconductor industry has had for years is the IBM announcement that it is pulling out of chip manufacturing.

IBM CEO Ginni Rometty has decided that IBM’s future is in software and services and chip manufacturing clearly doesn’t fall in either of these categories .

Moreover IBM’s chip manufacturing business lost $130 million last year and is slated to lose another $130 million this year while the capital costs to stay in the game are $5 billion a factory and rising.
That’s one way of looking at it.

The other way of looking at it is that IBM has been a stalwart of the world semiconductor industry, inventing the DRAM, mastering SiGe, SOI and much more besides and supplies manufacturing process technology to half the world’s major companies: Samsung, GloFo, UMC, ST, Renesas, NEC, Freescale, Toshiba and Infineon.
It is shocking to think IBM’s legendary R&D operation may be curtailed but, without the justification of a business outlet for its innovations, it may be.

One rather assumes that the obvious candidates for buying IBM’s fabs have already been tapped and that the announcement that Goldman Sachs has been appointed to look for a buyer for the fabs is to find an unobvious candidate.

The obvious candidates are Intel, TSMC, GloFo and Samsung.

However, Intel has net cash of only $7 billion and makes only CMOS chips, while IBM’s capacity includes processes like SOI and SiGe which Intel won’t need and the IBM fabs are not as advanced as Intel’s.

TSMC says it doesn’t want to operate foreign fabs; GloFo’s owners are said to be getting fed up with their capital-greedy chip investment and may not want to expose themselves further to the chip industry; Samsung already has as much operational and planned capacity in the USA as it needs.

So how about the non-obvious candidates?
Suggestions have been that Apple could enter into a jv with IBM to run the fabs. This would involve Apple putting a lot of money in to upgrade the fabs to the latest processes, but Apple has lots of money and IBM has the latest processes.
TowerJazz is another suggestion. The company has just formed a jv with Panasonic in which TowerJazz has a 51% share and which will own three Panasonic fabs in Japan.

Another suggestion is China. China has been trying, unsuccessfully, to build an indigenous chip industry for 30 years. Following the successful integration of IBM’s PC business into Lenovo, followed by the recent sale of IBM’s x86 server business to Lenovo, it would seem quite logical that a sale of IBM’s chip manufacturing would be to China.
Of course the European authorities, wedded to the idea of gaining 20% world market share in IC manufacturing, may see the opportunity to acquire IBM’s world-class process development capabilities as a sufficient reason to buy the fabs. IBM’s proficiency in SOI would give a boost to the European-developed FD-SOI process.
Then, of course, there are other emerging national tech players like Brazil and India who could see this as a once in a lifetime opportunity to acquire the basis for a chip industry.

Whatever the outcome of this, a chip industry without IBM will be a diminished industry.
Posted by Ron at 7:14 AM No comments: