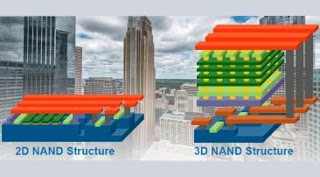 Currently the 3D manufacturing process is being developed to manufacture NAND flash (see the article below). However, it would be very useful to use for other product technologies such as DRAM, logic and analog. For logic products the process development emphasis would be on increasing the number of metal levels and their connections to vertical transistors. For DRAM products the  emphasis would be on adding memory cells that are located in layers vertically above the silicon substrate surface.

The article below discusses processing issues such as
"the challenges here are focused on variability control of several key processes....Alternating stack deposition must have precise control with good uniformities and low defectivity. “Initially, the uniformities must be good,” Applied’s Ping said. “It’s all going back to stress control because the alternating films are different. For each film there could be a mismatch. Stress could show up.”
“Repeatability at every single step is also critical and it has to be done at high productivity in order to keep costs down,”

"Tiny trenches or channels are etched from the top of the device to the substrate. To illustrate the complexity of this step, Samsung’s 3D NAND device has 2.5 million tiny channels in the same chip. Each of them must be parallel and uniform.”

One area that the article does not mentions is the additional circuitry complication of the 3D NAND products. For example there is a need to sense correctly and repeatedly every one of the larger number of smaller memory cells that are on each 3D NAND. Also the controller of the 3D NAND has to deal with the larger number of memory cells that need to be accessed and controlled.

How To Make 3D NAND

"Cavium Inc. will take on Broadcom, Intel and Mellanox in storage and networking with its billion-dollar acquisition of Qlogic Corp. The deal teams one of the semiconductor’s fastest growing companies with one just starting to emerge from a decline.


The acquisition adds Qlogic’s Fibre Channel and Ethernet controllers and boards to Cavium’s line up of communications, security and general-purpose processors, positioning Cavium as more of a full-line supplier to data centers. "

Cavium Buys QLogic for $1B

Deal expands vendor of data center chips
Rick Merritt
6/15/2016 07:15 PM EDT
SAN JOSE, Calif. – Cavium Inc. will take on Broadcom, Intel and Mellanox in storage and networking with its billion-dollar acquisition of Qlogic Corp. The deal teams one of the semiconductor’s fastest growing companies with one just starting to emerge from a decline.
The acquisition adds Qlogic’s Fibre Channel and Ethernet controllers and boards to Cavium’s line up of communications, security and general-purpose processors, positioning Cavium as more of a full-line supplier to data centers. The deal also gives Cavium a mature software stack in storage and networking and operational savings expected to amount to $45 million a year by the end of 2017.
Both companies sell to server makers and large data centers with a customer overlap of more than 60%. Qlogic’s customer base is highly concentrated with nearly 60% of its business for the last several years to three top server makers -- HP, Dell and IBM.

Cavium and Qlogic share more than 60% of their customers in common. (Image: Cavium)


Cavium will pay approximately $15.50 per share for Qlogic, $11 per share in cash and the rest in stock. Cavium will take on $750 million in debt to pay for the deal. The boards of both companies have approved the deal.
“In our view, this deal is all about company scale,” said Bob Wheeler, principal networking analyst at market watcher The Linley Group (Mountain View, Calif.). “It essentially doubles Cavium’s revenue and eliminates the redundancies of operating two public companies, [but] there is little overlap in products and customers, so there’s not much room for reducing R&D and other costs,” Wheeler said.
Qlogic rebounded slightly in its last fiscal year ending in May after reporting sagging results for several years. Annual revenues fell from $558 million in 2011 to a low of $460 million in 2014, then stepping up to $520 million last year. Profits tumbled from $140 million in 2011 to a loss of 18 million in 2014, recovering to a $50 million profit last year.

Cavium said Qlogic has 782 employees today. However, it reported 927 employees in its annual report in May. Cavium expects to add $400 million a year to its top line from the deal, suggesting it may cut Qlogic’s systems-level business in Fiber Channel switches.
“There’s a lot of cross pollination of IP and new products in storage and server that combine the two companies’ IPs,” said Cavium’s chief executive, Syed B. Ali in a call with financial analysts.
“The [Qlogic storage and networking] software is as, if not more important because it runs on all major operating systems and the major versions of them -- this is a huge task,” Ali said. “It would have taken us 5-7 years to have a mature stack, but this will now be available on Cavium products,” he added.
Cavium aims to pump Qlogic’s business, now growing at 8%, to 10% growth with the overall company targeting growth well into double digits. “This will be among the highest growing semiconductor companies in the world,” Ali said.
Depending on the area, it will take six to 12 months for Cavium to start winning new sockets based on synergies between the companies. Qlogic has more than $300 in cash on hand and will expand Cavium’s cash flow, funds that will be used in part to help pay down debt.
“The scale of operations of a nearly $1 billion revenue business will allow the combined company to deliver better solutions for customers and create more career opportunities for employees,” said Christine King, executive chairman of QLogic, speaking in a press statement.
— Rick Merritt, Silicon Valley Bureau Chief, EE Times
Posted by Ron at 12:26 PM No comments:

Semiconductor Fabrication Growth for 2016 and 2017 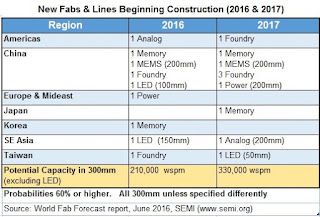 However Intel/ Micron's XPoint memory introduction in 2016 and developments of other type of 3D processing will impact fab lines capacity and the growth of semiconductor processing equipment.

3D process demand for etch and deposition is already impacting Applied Materials; see their recent quarterly results - Orders for the second quarter were $3.45 billion, up 37% from ayear earlier

Nineteen new fabs and lines are forecasted to begin construction in 2016 and 2017, according to SEMI.
While semiconductor fab equipment spending is off to a slow start in 2016, it is expected to gain momentum through the end of the year. For 2016, 1.5% growth over 2015 is expected while 13% growth is forecast in 2017.
Fab equipment spending – including new, secondary, and in-house – was down 2% in 2015. However, activity in the 3D NAND, 10nm Logic, and Foundry segments is expected to push equipment spending up to $36 billion in 2016, 1.5% over 2015, and to $40.7 billion in 2017, up 13%.
Equipment will be purchased for existing fabs, lines that are being converted to leading-edge technology, as well as equipment going into new fabs and lines that began construction in the prior year.
Table 1 shows the regions where new fabs and lines are expected to be built in 2016 and 2017. These projects have a probability of 60% or higher, according to SEMI’s data. While some projects are already underway, others may be subject to delays or pushed into the following year. 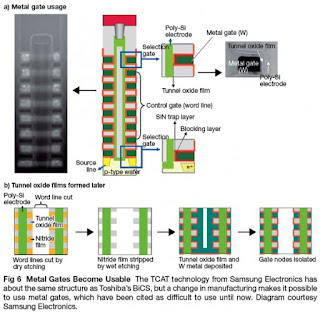