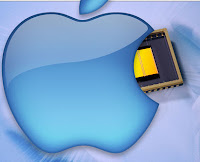 There is a room for an overall personal computer hierarchy reorganization. Maybe Apple could lead here.

Currently in PC/ Mac we have a microprocessor (with some fast DRAM memory) connected to long term storage in flash SSD or HDD.

There would be many benefits to adding a small flash NAND between the microprocessor and the long term storage. Such computer hierarchy would benefit from the faster operation of the small flash NAND storage and its long term non volatile storage. It will also reduce power consumption.

The NAND memory could support the microprocessor operations or be used for storage of the operating system.

There were rumors a couple of years ago about Intel working on such system. It never made it out due to legacy software optimization issues.

A research analyst from Barclays believes that Apple's success in NAND adoption will drive the company to use the technology in a rumored refresh of its MacBook Pro line, a move that will disrupt the business of of both hard drive and PC makers.

In a note to investors released on Wednesday, Ben Reitzes of Barclays Equity Research said that the adoption rate of Apple devices using SSDs, along with a continuing move to cloud computing, will push consumer laptop demand toward flash-based storage.

Perhaps the single greatest setback to flash adoption is that the price of solid state solutions grossly outweigh comparable HDDs, keeping the technology out of reach for everyday consumers. This cost ratio may tilt in the physical hard drive's favor, however consumers have recently started giving up storage space and low cost for design and performance benefits, evidenced by the success of the thin and light MacBook Air.

Reitzes believes that the advent of cloud computing will help ease consumers in the transition from physical drives to flash by offloading storage to servers, thus diminishing the need for pricey high-capacity NAND drives. Apple's iCloud is already well in-place and has the potential of filling offsite storage needs if the company chooses to move to a NAND-heavy laptop lineup.

For these reasons, the analyst expects Apple to reveal a NAND-equipped MacBook Pro as well as MacBook Airs with increased storage options in the near future.

"We believe these products combined can ramp quarterly demand for Macs by up to 1 million incremental units on a run rate basis - taking over a point of share from HDD-based PCs," Reitzes said.

He goes on to say that an estimated 5 to 10 percent of notebook PC sales have been cannibalized by NAND-carrying iPads and iPhones, further impacting HDD demand for PCs. The move to portable products has been dubbed as the "post-PC era," as consumers begin to replace computers with tablets and handset. Interestingly, this trend toward flash in consumer devices is seen as fueling data growth, which helps to augment sales of enterprise-class HDDs.