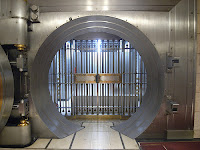 Congress is asking whether sensitive patent applications should be kept under wraps to protect them from economic espionage, a question that implies curbing the ability of inventors to promote their ideas globally.


Secrecy provisions have for decades been reserved for innovations with national security importance. Congress ordered the U.S. Patent and Trademark Office to consider whether similar restrictions should apply to inventions with implications for “economic security.”

Chart: Number of Secret Patents Imposed by U.S. Military .When inventors’ U.S. applications are secret, they are unable to patent their ideas in other countries. That alters a bargain, established in the U.S. Constitution, giving inventors a limited monopoly on their ideas in exchange for exposing knowledge to the world and allowing others to build on it.

“It’s ridiculous, absurd,” Bob Stoll, who ran the agency’s patent operations from late 2009 until Dec. 31, said in an interview. “We have an economically valuable patent we don’t want our companies to secure in China, in Europe, in Australia or anywhere else in the world? It flies in the face of what our country should be trying to do.”
The directive to the patent office was part of a spending bill enacted in November. The provision, added by the House Appropriations subcommittee led by Virginia Republican Frank Wolf, called for a review of whether patent secrecy should be extended to cover inventions “that could potentially impact economic security,” according to a Federal Register notice.
The patent office, which hasn’t taken a position, is collecting comments through June 19.

“While PTO has a fairly defined procedure for dealing with national security patents, they haven’t strategically rethought what is sensitive patent data in the 21st century,” said Thomas Culligan, Wolf’s legislative director.

Hackers and illicit programmers in China and Russia are pursuing American technology and industrial secrets, jeopardizing an estimated $398 billion in U.S. research spending, according to a November report from the U.S. National Counterintelligence Executive.

The report called China the world’s biggest perpetrator of economic espionage and said the theft of sensitive data in cyberspace is accelerating. Areas cited as most targeted include pharmaceuticals, information technology, military equipment and advanced materials and manufacturing processes.

Along with examining whether expanded patent secrecy is a good idea, the patent office is also asking who would be responsible for identifying applications to be kept under wraps, what criteria would be used, and what types of inventions would qualify. It also has to look at how it would affect inventors’ ability to obtain patents outside the U.S.

Applications usually are made public after 18 months, a standard followed in most developed nations. If applications are kept secret, at the inventor’s request or by U.S. determination, the owners can’t seek patents in other countries.


“There would be challenges relative to treaty obligations that we have, and those would have to be worked out,” David Kappos, director of the patent office, told a House Judiciary subcommittee on May 21.


There were 5,241 secrecy orders in effect in fiscal 2011, most established by the Defense Department, according to a patent office report given to the Federation of American Scientists, a non-partisan agency founded by the developers of the Manhattan Project to research issues that include reducing threats from nuclear, biological and chemical weapons.
Some inventions can remain secret for decades. One application for a radar system developed by the Navy in 1948 didn’t become a patent for 45 years.

The patent office looks for key words in applications to determine if something might be of interest, and passes those applications to the Army, Air Force, Navy and other defense agencies. If flagged, the applications are reviewed by examiners with security clearances and placed in a vault, with an annual review by the defense agencies to see if the secrecy order can be lifted and a patent issued.

There’s no appeal if an application is declared a secret, although some owners can get compensation if they can prove the invention has market value. Some applications are so sensitive that they’re sealed with access only to defense agencies, said Paul Fucito, a patent office spokesman.

“No applicant is very happy about having their application placed under a secrecy order,” said Don Pelto, a patent lawyer with Sheppard Mullin in Washington, whose firm represents defense companies. “There’s no way for the applicant to have that secrecy order lifted. You’re stuck. If the same stuck-ness applies to this potential new rule, applicants are in a heap of trouble.”

Manufacturers aren’t willing to give up foreign patents even if they are tipping off rivals or counterfeiters, said Stoll, now a lawyer at Drinker Biddle & Reath LLP in Washington.

“Commercial espionage is rampant and everyone’s trying to get a leg up on the leaders in the market,” he said. “But secret patent applications are fraught with peril and would harm the United States in the long run.”

It takes, on average, 34 months to complete an application, or 16 months after it’s made public, and even longer in semiconductors or electronics. Wolf is concerned that foreign entities could use that gap to get information that would put the U.S. at an economic disadvantage, Culligan said in an interview.

“It may be some cutting-edge technology, game-changing technology, and we’re exposing it at 18 months with no protections,” Culligan said.

Websites are dedicated to gleaning the next Apple Inc. (AAPL) or Google Inc. (GOOG) product based on their published applications, and rival companies routinely check patents to see what the competition is up to.

“No one knows if what’s in a published patent application is going to be a blockbuster -- it takes marketing and skill,” Pelto said. “Nearly every patent applicant is hoping their invention becomes economically significant. That’s part and parcel of the patent procedure in the U.S.”

Economic espionage is mostly aimed at technology and business strategy earlier than the patent stage, Willy Shih, a professor of management practice at Harvard Business School who studies industrial competitiveness, said in an interview.

“The much more interesting stuff, the really good stuff, is probably not patented yet,” Shih said, calling patents a trailing indicator of economically valuable data.

Relying on legal protections for trade secrets, in which inventions aren’t patented, is one route for companies that don’t want to expose their inventions to rivals.

DuPont Co., which kept trade secrets related to the manufacture of Kevlar, an anti-ballistic fiber used in police and military gear, accused Korea’s Kolon Industries Inc. of stealing that information, winning a $919.9 million jury verdict last year against the company.