It is interesting that semiconductor memory chips are the largest portion of smart phone cost (see below).

This is another proof of the growth of the flash market vs. DRAM memory.  Dram memory is only $8-10 while Flash is $20-22. (See more at Simon Sze - Inventor of Floating Gate Non Volatile Memory   and in March 16,2012 blog  When will Flash Memory Market be 2x of DRAMs )

May 9, 2012 8:08 PM EDT
Posted in Android, Apple, Mobile, Posts
0 Comments inShare.14PrintEmailNomura Equity Research recently released its “2012 Smartphone Guide,” which offers a graphical look at the components that go into phones and their providers’ market shares. More than 25 parts are needed to make a modern smartphone.

What were the interesting takeaways?
The display has been seen as the costliest part of the phone. Not so today, according to Nomura. NAND flash memory costs between $20 and $22 per device on average, as compared with $18 to $20 for the display. That’s good news for memory suppliers Samsung Electronics, Toshiba, SanDisk and Micron Technology. The NAND’s heftier price tag comes as phonemakers like Apple and Samsung increase the amount of memory in their devices.

While Qualcomm is the mobile chip market leader with a 24 percent share, followed by Texas Instruments Inc. with 12 percent, third place is shared by two vendors: STMicroelectronics NV and Taiwanese company MediaTek Inc. — the low-cost supplier that’s been gaining steam. At 9 percent, MediaTek’s share of the mobile semiconductor market last year was higher than that of Intel, Broadcom or Samsung. 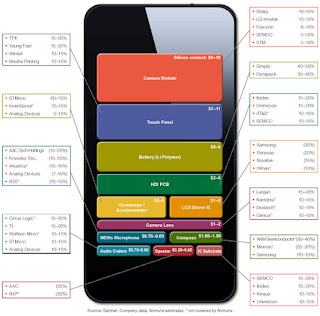 Nomura’s graphical guide is big, so we broke it into different chunks below. You can also view the complete chart.