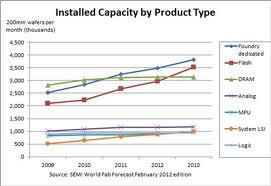 Combined NOR and NAND flash Flash memory together already surpassed DRAM sales. See from the article below NAND and DRAM market size -


While the NOR market size is not growing as fast as NAND market it is still big enough to make the combined flash market bigger than DRAM market.


When will NAND sales surpass DRAM?

Mobility—smartphones and media tablets—is the driving force in electronics today. PC sales, meanwhile, are sluggish, with a forecast growth rate of only about 5 percent, according to International Data Corp.

Despite that, sales of DRAM—the main memory in PCs—remain greater that those of NAND, and are likely to stay that way for at least the next couple of years, according to market researchers. IC Insights, which expects total flash memory sales to eclipse DRAM sales for the first time this year, expects NAND to overtake DRAM sales in 2014. IHS iSuppli, however, forecasts that DRAM will remain in the lead through at least 2016.

"I think that's really totally dependent on solid-state drives," Splinter said. He had noted earlier in the call that adoption of SSDs is not happening as quickly as forecast.
"We've been quite disappointed that tablets and smartphones haven't accelerated the use of flash capacity," Splinter said. He added that Applied's hope now is that SSDs will take off with the introduction of ultrabooks—the thin, low power notebook PC concept being driven by Intel Corp.


Splinter noted that the size of the markets is now relatively the similar (about $26 billion to $28 billion for NAND, and about $28 billion to $30 billion for DRAM). Despite analysts' forecasts, Splinter suggested that a surge of NAND buying could cause it to overtake DRAM as quickly as next year.
Is such a surge in the cards? According to Splinter, that's up to SSDs.
Posted by Ron at 8:22 AM