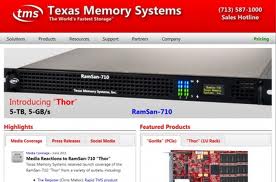 It is interesting that IBM buy an hardware company. It further highlights the rising importance of flash memory solid state drives (SSD) as part of data storage system, cloud infrastructures, and the need for more and better storage in-house. Gaining in house knowledge would help IBM in thier consulting and services projects.
Ron


"TMS has been around since 1978 but remains relatively small with 100 employees. It started with memory systems for seismic processing for the oil and gas industry. TMS was among the first solid-state storage vendors, shipping its first NAND flash system – the RamSan-500 – in 2007."

"TMS, in fact, has been selling IT transformation for years. An early player in the Flash-based storage market, the 34-year-old company sells rackmount systems and PCIe cards under its RamSan brand. The purpose of these solutions is to improve the performance of IT systems, using less power and smaller form factors.
Performance and throughput are getting more important than ever, thanks to big-data, cloud infrastructures, and the need for more and better storage in-house -- at lower-than-ever prices.

TMS makes its own solid-state storage modules with its own controllers and designs. It claims patented RAID technologies -- an important feature, given that early solid-state storage systems were sometimes accused of being less durable than hard-disk drives."

In what could be one of the most important acquisitions of the year, IBM today announced plans to acquire Texas Memory Systems. While the details will be presented later on today, we think this is an excellent move on the part of IBM. Texas Memory brings a deep technical bench and excellent leadership that will allow IBM to differentiate itself from other large storage vendors.

As we described in our article "  IBM Storage Makes Its SSD Case "  this purchase significantly strengthens IBM's SSD Strategy. As the Texas Memory products are integrated into the IBM portfolio it puts IBM on par, if not ahead of EMC for completeness of flash offering.

Now the race will be to see who can address the integration of all of these flash domains (server, network, storage) as well as automate these domains. Doing so is a key requirement in eliminating performance sprawl as we describe in our latest chalktalk
Posted by Ron at 9:46 AM