Micron acquisition of Elpida will have some digestion pains. However the decreasing number of DRAM manufacturers to just 3 dominating manufacturers will have a strong long term affect on prices, availability and power of the three vendors.

The article below discuss the likely digestion pains of Micron integrating Elpida “Micron’s previous acquisitions in years past of specialty memory makers Numonyx and Inotera presented unanticipated surprises, and in some ways Micron is still digesting those purchases.

Adding Elpida to the mix is unlikely to hasten the rest of the complicated integration process that Micron still needs to do with its earlier buyouts.”

Risks Come with Rewards in Micron’s Purchase of Elpida

Micron Technology Inc.’s recent purchase of bankrupt Japanese entity Elpida Memory Inc. is a bold move not without risk, even though Micron will emerge from the acquisition considerably larger with more than double its original manufacturing capacity for dynamic random access memory (DRAM), according to an IHS iSuppli DRAM Market Brief from information and analysis provider IHS (NYSE: IHS).

U.S.-based Micron’s buyout of Elpida on July 2 is expected to boost the Idaho firm’s DRAM production volume to approximately 370,000 wafer starts per month over the long term, up a notable 131 percent from 160,000 wafer starts prior to the purchase. The new-found capacity by the only U.S. memory manufacturer allows it to leapfrog perennial second-placed Hynix Semiconductor of South Korea, which now will become the third-ranked player in the global DRAM industry, with about 300,000 wafer starts per month.
Both Hynix and Micron will continue to trail DRAM market leader Samsung Electronics, also of

South Korea, which leads with 400,000 wafer starts per month, as shown in the figure below. Based on first quarter rankings, the Micron acquisition will boost its standing to 24.8 percent share of the DRAM space, behind Samsung’s 40.8 percent portion but ahead of Hynix’s 24.2 percent share of market. 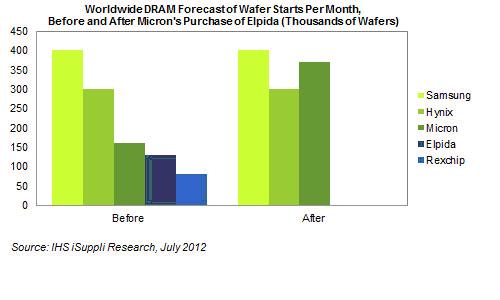 “Several key components make the Micron-Elpida deal appear to be a smart move, but integration could prove challenging or even messy if details are not worked out carefully enough,” said Mike Howard, senior principal analyst for DRAM & memory at IHS. “Micron’s previous acquisitions in years past of specialty memory makers Numonyx and Inotera presented unanticipated surprises, and in some ways Micron is still digesting those purchases. Adding Elpida to the mix is unlikely to hasten the rest of the complicated integration process that Micron still needs to do with its earlier buyouts.”
Moreover, the transfer of technology entailed by the deal with Elpida—a competitor on roughly the same scale as Micron—may prove costly and time consuming.
“All this means that while Micron has put a tremendous amount of work into the acquisition, the real work lies ahead, IHS believes,” Howard added.
Micron Structures Acquisition Transaction Shrewdly

In terms of the price, the total purchase cost of Elpida to Micron is $2.5 billion, of which $750.0 million is to be paid in cash. The cash portion of the payment is intended for Elpida assets and will be due at the close of the deal, expected sometime in 2013. The cash payment won’t necessarily reduce the cash balance of Micron, as it will gain access to all of Elpida’s cash and current assets on the bankrupt company’s balance sheet. Elpida at the end of December 2011 had approximately $1.4 billion in assets.
The other part of the purchase price is the remaining balance of $1.75 billion. This part of the payment, which does not start until December 2014 and will continue to 2019, is paid out in interest-free installments—a terrific boon to Micron, considering that interest payments could have easily approached 5 percent.

Lastly, of keen interest to DRAM market watchers and prognosticators is that the deal also calls for the payments to come from the free cash flow of a restructured Elpida, which will now turn into a Micron subsidiary. If Elpida is not cash-flow positive in its new role as Micron offspring, then no payments will have to be made by the parent company. By structuring the deal this way, Micron has insulated itself from any drastic downturns in the DRAM market or from being upended by larger macroeconomic events beyond its control.
In a separate but related deal, Micron also purchased Taiwanese maker Powerchip Semiconductor’s minority interest in Rexchip Electronics, in which Elpida had majority two-thirds share. The deal for $330 million gives Micron an overwhelming 89 percent ownership share of Rexchip, which has a cost competitive, leading-edge manufacturing plant in Taiwan. The Rexchip facility formed a very attractive component of the entire Elpida deal, and Micron’s concurrent purchase of both Elpida and Rexchip gives the U.S. memory maker an even stronger edge in the tightly held DRAM space.
Posted by Ron at 9:41 AM