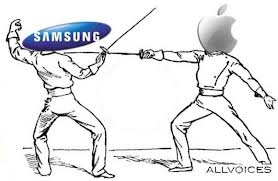 Some highlights from the conference are summarized in gigaom blog such as "Supreme Court and unlimited copyrighted".... impact of "the Court of Appeals for the Federal Circuit (the patent court) and the United States Patent and Trademark Office, have an outsize influence on the country’s innovation policies."

It would be interesting to find out how other cases of patent wars, such as the radio development in the 1930s were resolved.
Ron

http://gigaom.com/2012/08/12/patent-trolls-and-horse-powered-boats-8-highlights-from-stanfords-ip-conference/
"The smartphone patent mess: the past is the key to the future
The sight of Apple and Samsung using hundreds of thousands of patents to sue each other all over the world is enough to induce despair about the patent system. But Professor Colleen Chien of Santa Clara puts this in perspective by studying two previous patent epidemics — one over farmers’ tools in the 1880′s and another over railroad technology around the turn of the century. In both cases, interest groups built the requisite pressure over a period of 15-30 years to reform the system. To address the current problem, Chien says history shows that narrow laws will fare better than broad bills aimed at reforming the entire patent system."