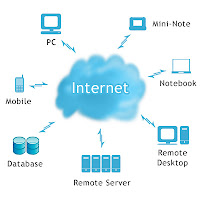 DRAM manufacturers such as Samsung, Hynix, and Micron will benefit from the new demand for storage and servers (see below).

Intel benefited from it last quarter. Intel, which also supplies chips to the slow-growing PC market, increased its revenues by 20%. They had more than $10 billion in revenues from ICs sold to data centers, for servers, storage products, and networking. It is likely that databases and cloud servers (20% of sales, 3x PC segment growth) added to Intel's growth in 2011.


DRAM troubles come to an end, key to success is cloud storage

According to TrendForce, this year’s biggest DRAM industry event, the announcement that Japanese manufacturer Elpida will join hands with U.S. maker Micron, marks the end of a perfectly competitive market as Samsung, Hynix, and the new Micron team become the three main players in an oligopolistic market.

Share on linkedinShare on printShare on emailMore Sharing Services10 hours ago DRAMeXchange, a research division of TrendForce, indicates there is hope for DRAM price recovery, forecasting a 15% decrease in yearly DRAM revenue and a 30% yearly bit shipment increase in 2012. 1Gb average selling price is expected to fall by around 30% this year, an improvement over last year’s 50% decrease.

The future of the DRAM market will see a transition from PC DRAM to server and mobile DRAM, important for the cloud storage sector, and it would be prudent for Taiwanese makers to speed up production integration to lower the risk of overreliance on PC DRAM.

In 2008, the DRAM industry was hit hard by the global financial crisis – German memory maker Qimonda withdrew from the market, and Taiwanese DRAM manufacturers saw capacity cuts of nearly 60%. As the economy gradually recovered, demand exceeded supply, giving DRAM makers a year and a half of good business – DRAM average selling price rose by 8.9% in 2010.

Bit output increased as well, and DRAM industry value grew by 72.8% compared to 2009. In 2011, DRAM production increased by 50% over the previous year, as manufacturers continued to advance two generations of process technology a year. With the rise of smartphones and tablet PCs, PC DRAM was in severe oversupply in 2011, with a 50% decrease in average selling price compared to 2010, and a 24.6% decrease in DRAM industry value.

Aside from industry leader Samsung, none of the memory manufacturers came away without losses, and only a handful of makers remain in the once populated industry.

Samsung Safe with Strength in Technology Migration and Product Mix

TrendForce indicates, bit growth is no longer the key to profitability. Continued technology migration is necessary, but a flexible product mix is a must to cater to the constantly changing demands of the market. For instance, in the first quarter of 2012, Samsung not only dominated the mobile DRAM sector with nearly 60% market share, but the maker was also the most aggressive in transitioning to 30nm process technology in the mobile DRAM sector.

The Korean heavyweight was the only DRAM manufacturers to see profits in 1Q12, an indication that technology migration is not the only prerequisite to profitability – proper product mix is a necessity as well.

In conclusion, in the coming oligopolistic market era DRAM makers will need to be reborn to enjoy the fruits of their labor once again, and only improving product diversification and increasing added value will bring profitability.