In 2012 "cache SSD volume this year to 23.9 million unit...
dedicated SSDs that contain no cache component, will attain shipments this year of 18 million...
hybrid HDDs will reach two million units this year...on their way to reaching 25 million units by 2016"

A key driver of cache SSD  is Intel's strong support of ultrabooks.

In January 2012 IHS report "Fueled by rising sales of ultrabooks, shipments of cache SSD units in 2012 are projected to reach 25.7 million units, up from 881,000 units in 2011 when the technology first appeared. Next year, cache SSD shipments will amount to 68.2 million units, on their way to approximately 121.0 million units by 2015, as shown in the figure below. 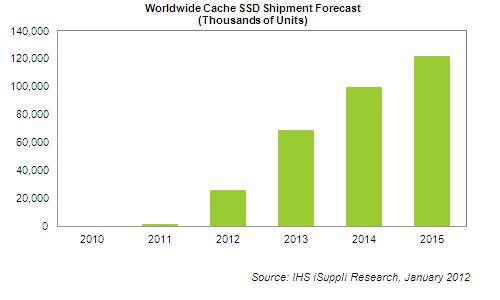 The majority of cache SSD units will find their way into devices known as ultrabooks—the superthin mobile computers launched by chipmaker Intel in 2011—even though non-ultrabook desktops and notebooks also will account for cache SSD use. Of the more than 25 million cache SSDs to be shipped this year, about 22 million units will be present in ultrabooks, up from a mere 500,000 last year."

Consisting of a traditional HDD and an integrated NAND flash layer within one self-contained form factor, hybrid HDDs are a new storage option being considered for the super-thin ultrabooks. The Momentus XT hybrid product from Seagate Technology has up to 8GB of single-level-cell NAND and 750GB of memory on two 2.5-inch platters. Seagate rivals Western Digital and Toshiba are also considering hybrid HDDs of their own, with drives containing 8GB or more of NAND cache.

In contrast to hybrid HDDs, cache SSDs are employed as a discrete, separate memory component alongside a HDD, with both elements existing side by side, not together in one housing unit. A sample cache SSD configuration from Acer's Aspire S3 ultrabook carried a 20GB SSD next to 320GB of hard disk space.

"The cache SSD solution was first hit upon by PC manufacturers because the use of a dedicated solid state drive proved too expensive when passed on to consumers in the retail market," said Ryan Chien, analyst for memory & storage at IHS. "However, a combined physical hard disk drive with a smaller cache component allowed PC makers to reap the advantages of faster responsiveness and larger capacities while keeping costs down."

Cache SSDs also offer more advantages than consolidated hybrid HDDs. For instance, discrete cache SSDs and HDDs are much more scalable and efficient for mainstream storage, given the broad selection of drive manufacturers, IHS said. And because SSDs and HDDs have lately been focused on more mobile sizes, few changes are needed for cache SSDs or thin HDDs to keep their manufacturing processes cost effective.

Moreover, the expected evolution of cache SSDs to a swappable mSATA form factor not only helps narrow the convenience advantage currently enjoyed by hybrid HDDs but also facilitates upgradability akin to DRAM modules or USB drives, IHS noted. HDDs sized 7mm are available with 500GB in 2.5-inch platters, with a 5mm z-height as the next step, while hybrid HDDs are still 9mm high. SATA SSDs are also getting denser, and NAND on the motherboard is becoming more feasible.

Such benefits overall highlight the strength of discrete, dedicated hardware emblematic of cache SSDs over those of hybrids, which tend to make compromises in exchange for volume implementation, IHS said. Cost concerns, longer design cycles and tighter engineering tolerances in the case of hybrid HDDs also add to their difficulty of use in ultrabooks, IHS added.

As a result, the gain achieved through a consolidated form factor supposed to be a strength of hybrid HDDs will actually be a weakness in a few years as cache SSDs overcome that advantage, IHS said. For their part, cache SSDs will remain as the favored storage solution in ultrabooks, with penetration of the desktop and the rest of the notebook segments anticipated to follow.