The article below discusses foundries' strong Q2  results, while predicting a slower Q3.

"Pure-play foundry semiconductor manufacturers enjoyed a robust second quarter thanks to enthusiastic consumer purchasing of wireless products like mobile handsets and tablets, but the industry is slowing down in the second half of 2012 as economic tremors roil the supply chain"

However, I wonder about the impact of the slow ramp-up of manufacturing wafers using the 28nm manufacturing process in Q2 and Q3. There is pent up demand for wafers built using the 28nm process which could impact Q4 (see April 2012 comments Qualcomm and Nvidia 28 nm Wafers? Shortage... and March 2012 comments Nvidia: TSMC 20nm Essentially Worthless). The lack of 28nm wafers negatively impacted Qulacomm, Nvidia and other companies.

Another potential upside for the second half of 2012 is the introduction of window 8 and its impact on demand for tablet computers.

Len Jelinek October 2, 2012
Pure-play foundry semiconductor manufacturers enjoyed a robust second quarter thanks to enthusiastic consumer purchasing of wireless products like mobile handsets and tablets, but the industry is slowing down in the second half of 2012 as economic tremors roil the supply chain, according to an IHS iSuppli Semiconductor Manufacturing & Supply market tracker report from information and analytics provider IHS.

Revenue for pure-play foundry suppliers—companies whose entire business involves producing semiconductors for other firms—reached $7.8 billion in the second quarter, up 16 percent from $6.7 billion in the first quarter.

The second-quarter expansion will prove to be the strongest this year, as forecasts show a slowdown occurring during the next two quarters. Revenue of $8.3 billion is projected for the third quarter, equivalent to a weaker sequential growth of 8 percent. A seasonal decline of 5 percent in the fourth quarter then will follow, dropping revenue for the period to $7.9 billion. 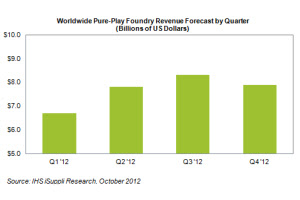 The strong showing of the second quarter this year is atypical. Even though the third quarter is the largest revenue period for the foundry sector, a new pattern of manufacturing has emerged, with initial product shipments from foundry suppliers for new design wins now moving from the third quarter to the second. This shift is related to end suppliers introducing next-generation wireless products, like cellphones and tablets, earlier in the year in order to capitalize on sales during a longer period—one lasting three quarters, instead of the usual two quarter time frame that traditionally starts at the beginning of the second half.

As a result of the shift, foundry suppliers must start to adjust technology development and factory expansion plans to mirror these changes. Shipments in the third quarter are now also a direct reflection of second-quarter performance.


Impending Q3 concerns on the horizon

The third quarter this year, however, is when manufacturers can begin to anticipate a reduction in orders, IHS iSuppli predicts. While demand for advanced technology will continue to drive overall revenue growth within the industry, the effects of external influences—such as a deteriorating global economy—will start being felt. The financial issues in Europe, for instance, will leave their mark in Asia as well as North America, and shaky consumer confidence throughout the world will result in an uncertain outlook for holiday spending. The end result would be a greater amount of inventory left throughout the industry.

Questions also abound on whether consumers will be willing during the next few months to pay for the latest technology rollouts. Unlike last year when holiday shoppers were enticed to purchase lower-cost electronics resulting from excess inventory, this year will be different, with consumers seeing a complete set of new electronics offerings focused on mobile communications, including next-generation tablets, feature-rich smartphones and Ultrabooks with the soon-to-be-launched Windows 8 operating system.

And while the potential exists for increased sales in the second half, any projected upticks are likely to be insufficient to drive major revenue increases for foundry players. This is because any innovative products introduced at this time will be too late to have any tangible effect on revenue for the remainder of the year.

At the current production pace, foundry manufacturing run rates will be negatively affected through the first quarter next year lasting until the first half of the second quarter, IHS iSuppli believes. The industry will begin to recover after that, with the third quarter next year anticipated to grow by a sequential 10 percent.
Posted by Ron at 6:57 AM