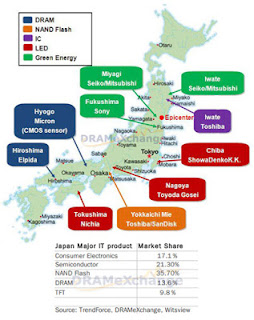 The article below discusses the fab materials market in Japan and states that Japan is maintaining its global position. I don't believe that Japan will be able to maintain its share.

The cause is the rising cost of new process technology. One of the casualties of the $10 Billion cost of developing new semiconductor technologies is Japan's semiconductor industry as is detailed in the March 2012 comment Are Japan's Fabs stuck above 28nm Process Technology?

October 3, 2012 - Semiconductor manufacturers in Japan are either consolidating or closing fabs, and, in several cases, transitioning to a "fab-lite" strategy, all in a restructuring effort to meet the market challenges ahead. While device manufacturers are consolidating manufacturing operations and plan to outsource more wafer fabrication and package assembly to foundries and packaging subcontractors, a large installed fab capacity remains in Japan. Recent data for the year shows overall wafer area shipments into Japan's fabs being the same as shipments into Taiwan.

By 2014, the total installed fab capacity Japan should increase slightly from about 4.5 million to 4.6 million 200mm equivalent wafers per month. Installed 300mm fab capacity is expected to increase from about 760,000 to 840,000 300mm wafers per month -- representing, by region, the third largest 300mm fab manufacturing capacity base globally. Over the next several years, fab spending in the Japan market will be directed towards the production of NAND flash memory, power semiconductors, high-brightness LEDs, and CMOS image sensors. 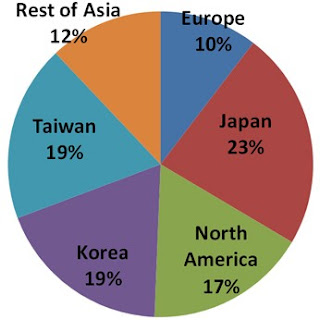 Overall equipment spending in Japan will likely range on the order of $4 billion per year. Expected NAND flash investments in 2013 could approach up to $2.5 billion. LED fab equipment spending is estimated to be $340 million next year. Finally, Sony is expected to invest about US$ 1 billion or more in its CMOS image sensor production.

Leading Japanese equipment and materials suppliers will exhibit at SEMICON Japan 2012 on December 5- 7, along with global key players, at the Makuhari Messe, Japan. Find the latest products and innovations this companies offer to customers globally that enable key technologies for the future including 450mm, EUV, TSV, power devices, and HB-LEDs to name a few. Also, the show will co-locate with a major photovoltaic show, PVJapan 2012 so you can connect to two major microelectronics industries in a single visit.
Posted by Ron at 9:10 AM