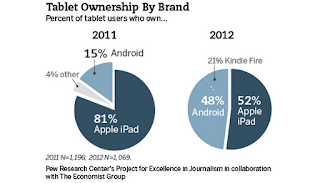 A key reason for android tablet's strength is the multitude of products made by many vendors using the Android platform. The introduction of a new kindle fire by Amazon and other vendors updating their offering will propel this trend.

It is very tough for a single company to control the market with just one dedicated product line.

The article below discusses that the Android tablet is growing faster than iPad " In the year of 2012, Android holds a whopping 48% of all U.S. tablet sales, bringing Apple’s iPad into reach at just 52%"

A new study from the Pew Research Center has pegged Android at a spot in the tablet market that we didn’t think would come this early in the game. In the year of 2012, Android holds a whopping 48% of all U.S. tablet sales, bringing Apple’s iPad into reach at just 52%. Although, Amazon’s Kindle Fire accounts for a hefty 21% of Android’s tablet market success. And do keep in mind, these numbers do not reflect Nexus 7 or Kindle Fire HD sales yet. 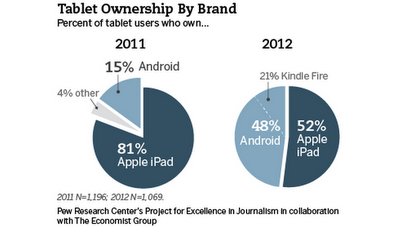 The study also shows the world sales data, which differs quite a bit. According to the report, Apple still holds a commanding 61% of the world’s tablet market with Android coming in at a much lower 31%. But hey, things are looking up for Google’s Android. Once numbers are published reflecting the seemingly popular Nexus 7 and Kindle Fire HD tabs, these numbers are sure to change a wee bit.

MG Siegler is a general partner at CrunchFund and a columnist for TechCrunch, where he has been writing since 2009. His focus is on Apple. Prior to TechCrunch, MG covered various technology beats for VentureBeat. Originally from Ohio, MG attended the University of Michigan in Ann Arbor, MI. He’s previously lived in Los Angeles where he worked in Hollywood and in... → Learn More

Trolls, feel free to skip to the bottom of this column and post your comments immediately without reading a word. Actually, who are we kidding — you didn’t make it this far.

Everyone else, brace yourselves. You may want small children to leave the room. I’m about to do something I don’t do often — something I always said I’d do if the product deserved