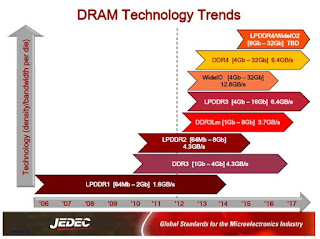 "mobile DRAM commanded more than 26 percent of all DRAM revenue during the second quarter—a significant improvement from 19 percent the same time a year ago, and from 11 percent two years ago in 2010.
This is attributed to 2 reasons:
1. Share of mobile DRAM bit shipments is now at 17.8 percent, up from 7.9 percent in the first quarter.
2. The price of mobile DRAM has fallen less than that of its commodity cousin and its pricing is overall less vulnerable given the segments it plays in."(from Mobile DRAM Market Grows, Samsung Domination Continues)

Second, the price of mobile DRAM has fallen less than that of itsd cousin, commodity DRAM, IHS noted. While commodity DRAM historically has been subject to great swings in pricing—with the product losing as much as half of its value from the second to the fourth quarter last year alone—mobile DRAM pricing is less vulnerable, falling 10% per quarter on average.

Mobile DRAM also tends to be priced according to manufacturing cost, not based on the general balance between supply and demand. As a result, DRAM companies are able to earn a more reasonable margin for their mobile memory products—unlike in commodity DRAM, where negative margins are frequently the rule.

With the success of smartphones such as the Galaxy S3, the South Korean electronics titan also is now one of the world's largest consumers of mobile DRAM. Samsung enjoyed a 3% improvement in sales during the quarter, and its year-to-year growth was even more impressive at 35%.

SK Hynix was No. 2 behind Samsung with sales of US$362 million, down from US$366 million in the first quarter and from US$377 million the same time a year ago.

Elpida Memory snagged a 13% share based on mobile DRAM revenues of US$245 million in the second quarter of 2012, while Micron Technology saw its share amount to 4% in light of US$79 million in revenues.
By: DocMemory
Posted by Ron at 7:44 PM