"Micron was able to claim some of the market share ceded by Toshiba. The Japanese maker in the second quarter saw its share decline by 9.5 percentage points sequentially, which occurred after strong growth in the first quarter....
Micron accounted for 80 percent of production from its joint venture with Intel, up from 62 percent in the first quarter. The increase was part of a revised capacity agreement between the two companies."


The pie chart shows how much Micron's market share improved since July 2011. (via https://www.semiconportal.com/en/archive/news/main-news/110715-toshiba-fab5-nand.html).


Since July 2011, NAND prices have been trending down. From the second article below:

"over the last two or so years, Micron, Samsung, SK Hynix and Toshiba began to expand their NAND production at a dramatic pace. The goal was to meet the anticipated demand for the next wave of product drivers, such as smartphones, solid-state drives (SSDs), tablets and ultrabooks.
Seeking to drive down product costs, particularly for SSDs, NAND vendors took the lead in process technology. For example, the Toshiba-SanDisk duo has been ramping up parts based on the world’s most advanced process, a 19nm technology.
The bottom fell out of the NAND market in recent times. NAND vendors built up too much fab capacity. Average selling prices (ASPs) for NAND fell by 46% in the first half of 2012. Demand for NAND in smartphones and tablets remains overwhelming, but SSD and ultrabook shipments have been disappointing thus far."

In a First, U.S.-Based Micron Takes 20 Percent Share of the NAND Flash Market

For the first time since it entered the industry seven years ago, U.S.-based Micron Technology Inc. managed to cross the 20 percent market share threshold in the NAND flash memory business during the second quarter.

Micron posted the strongest sequential performance of all NAND suppliers, with second-quarter revenue amounting to $897 million, up 6 percent from $846 million in the first quarter, according to an IHS iSuppli
In comparison, the other ranked suppliers all suffered revenue declines during the same period.

Despite overall NAND flash market revenue declining by 13 percent, Boise, Idaho-based Micron increased its market share to 20.7 percent in the second quarter, up from 17 percent in the first quarter, as presented in the table below. 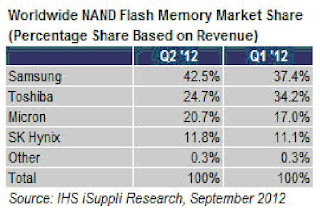 “Defying weak demand and falling prices in the overall business, Micron expanded its NAND revenue and market share to reach the key 20 percent milestone for the first time since it started selling the memory in 2005,” said Dee Nguyen, memory analyst at IHS. “Micron not only successfully increased its bit shipments of NAND flash by a whopping 68 percent, it also benefitted from a reallocation in production from the NAND joint venture partner with Intel Corp., while capitalizing on the travails at its close competitor—No. 2-ranked Toshiba Corp.”

See the rest at www.maltiel-consulting.com/nandprices-market-shares-micron-up.html

The NAND flash memory market is entering into a new and painful cycle, a period that will impact suppliers, OEMs and fab tool vendors alike.

For some time, there has been an oversupply and depressed pricing in the NAND market. In mid-2011, Micron, Samsung, SK Hynix and Toshiba put on the brakes in their capital spending plans. And in recent months, NAND suppliers in total have announced plans to cut 150,000 wafer starts per month, or about 12% of the world’s NAND capacity, amid ongoing losses and sluggish demand.

Just as suppliers moved to cut their production, spot shortages of NAND surfaced at some OEMs in early September. Most OEMs are not seeing any shortages, but that could all change. Apple, the world’s largest buyer of NAND, could cause some gyrations in the channels as it ramps up its new iPhone 5.

So what’s the outlook in the fluid and confusing NAND market? Amid a bitter legal battle with Samsung, speculation is rampant throughout the NAND industry about whether Apple will swap suppliers from Samsung to SK Hynix, Toshiba and Micron. If that happens, Samsung would face an oversupply in NAND, while others may see capacity shortfalls.

The outlook is also not so rosy for fab tool vendors, which counted on a big capital spending cycle for NAND. In fact, NAND suppliers are expected to push out their capital spending plans until June of 2013 and perhaps beyond, said Vijay Rakesh, an analyst with Sterne Agee.

The lack of capital spending is expected to create a shortfall in NAND capacity, creating perhaps a long cycle of acute shortages. Presently, there is a capacity glut for NAND. “Demand should catch up with capacity by mid-2013,” said Jim Handy, an analyst with Objective-Analysis. “Then, there could be NAND shortages from then until the middle of 2015.”

See the rest at www.maltiel-consulting.com/nandprices-market-shares-micron-up.html