Below is another example of the end of Moore's law.
See also earlier post.

2. The 22-nm FinFET high-volume ramp-up is already more than two years behind 32-nm. FinFET is a difficult technology. The activities of Intel have been outstanding, but many additional challenges must be overcome to support the multi-threshold voltages and multiple VDD levels that are needed for SoCs.

3. Next-generation 20-nm planar CMOS will have a range of additional tolerance control challenges compared to 28-nm. One likely impact is that cost per gate at 20-nm will be higher than at 28-nm. 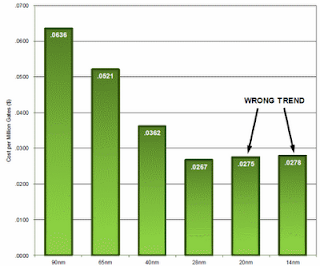 With the potential for increased cost per gate, additional compaction will need to be done, which will lengthen design completion times. Cost per gate at 14-nm can also be higher than that at 28-nm.

4. After 20-nmm, what is next? The semiconductor industry is committing to 14-nm FinFETs. There will, however, be many manufacturing challenges, including step coverage, control of the FIN dimensions, use of double patterning on multiple layers, and even the need for quad patterning.

The recent scanner problems on the 28-nm line indicate that the limits of many technologies are being reached.

Another key problem with FinFETs is the ability to have multiple VDD levels on the die as well as multi-threshold voltages.

After 14-nm, there will be a range of new challenges (EUV, 450-mm, carbon nanotubes, etc). The semiconductor industry must be realistic that the supply challenges are becoming more difficult, and there will be a lengthening of the time to migrate to smaller feature dimensions.

Apple has already adjusted in that the only real enhancement to the iPad from a hardware perspective is higher-resolution display.

With the capex cost of 10,000 wafers per month at $1 billion, the cost penalties for the wafer vendors will be very high if the appropriate adjustments are not made.