The new iPad processor A5X is about 36% larger than the A5 processor of the previous iPad generation.  Both the A5x and the A5 are using 45nm process.  This was likely designed in order to get the largest number of working dies from each wafer. Apple will probably do a shrink to the 32nm process when the process becomes more mature. The process shrink will have the benefits of lower power usage which will reduce iPad over-heating and will increase battery time.

It is interesting that while intel already uses 32nm, Apple still uses Samsung's at 45nm.

"A5X measures roughly 163 square millimeters, compared to about 120 square millimeters for the standard A5. Both chips use identical ARM processor cores, but the A5X adds four PowerVR SGX543MP4 graphics cores, which are paired in groups of two and then symmetrically opposed to each other on the floor plan.
The A5X, like the standard A5, features two application processor cores and operates at 1 GHz., UBM TechInsights said. But the A5X includes more DDR interfaces and more architecture added for the handling of quad-core GPU..."

The beefed up DRAM memory interface and the increased graphic processing power is required for the enhanced display of the new iPad.


Since its introduction almost nearly two years ago, the iPad not only ushered in a new age of consumer electronics by bringing visibility to the ‘tablet’ product, but it also quickly dominated its market. By the end of 2010, Apple had sold over 15 million iPads and, despite strong competition from products released by Motorala and Samsung, held a 75% share of overall sales of tablets.

Approximately one year later, Apple introduced the iPad 2 to much fanfare. Improving on the original, Apple increased the processor power with the introduction of the Apple A5 dual-core processor. As expected by many, the iPad 2 also sold in the millions of units.

Apple had begun a pattern of lifecycles for iPads, so it was no surprise on March 7th that the third generation of the iPad (referred to by Apple as the “new iPad” or “the iPad 3” by others to avoid confusion) was announced. Building upon Apple’s history of iterative improvements in new products, the new iPad boasted of a new Retina display (with 2048 x 1536 resolution, 3.1 total million pixels and 264 pixels per inch) promising the most vibrant iPad to date, a 5 MP backside illuminated sensor that would make the iPad comparable to high-end digital cameras, and the introduction of a brand new processor, the Apple A5X. The new iPad, or iPad 3, was also the first Apple device to the LTE-enabled (or 4G), marking Apple’s first foray into the fastest wireless baseband spectrum available.

When we picked up the device on March 16th, we took it to our lab as soon as we could to take it apart and analyze what makes the new iPad, or iPad 3, different from its predecessors. Of note, was the understanding that some major semiconductor manufacturers were going to walk out with some major design wins, as a product that’s expected to sell in the tens of millions should obviously help their bottom line. The first major design winner in the new Apple iPad is a long time partner in Broadcom. Broadcom picked up three major design wins, two of which for their touchscreen controllers (the BCM5974, which have been found in the iPad 2 and the BCM5973 which was found in the previous iPads and the 1st generation of the iPhone). The other major design win comes for their four-in-one combo wireless chip, the BCM4330, which was also found in the iPhone 4S. Below are some images of the Broadcom ICs we’ve analyzed using our de-encapsulation (decap) process. 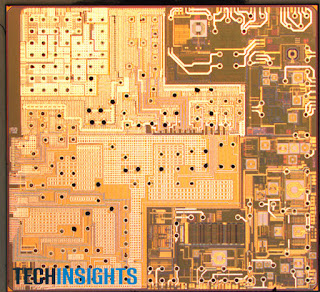 Qualcomm was another major design winner. Qualcomm has benefitted greatly from Apple’s move into the CDMA market (such as when they introduced the Verizon iPhone 4). When Apple made the decision to offer CDMA versions of their product, it gave Qualcomm the foot in the door it needed to usurp Infineon as the baseband/wireless transceiver provider for them. Since the CDMA iPhone 4, Qualcomm has gotten design wins in the iPad 2 and became the sole IC provider for the iPhone 4S. With the new iPad, Qualcomm gets its LTE Chipset, the MDM9600 designed into it. Qualcomm also provides the RTR8600 transceiver chipset and the PM8028 power management IC. The PM8028 was found within the iPhone 4S whereas the RTR8600 is a major design coup for Qualcomm, replacing the socket that was once held by Infineon/Intel. With the RTR8600, Qualcomm has officially replaced each socket previously held by Infineon/Intel. 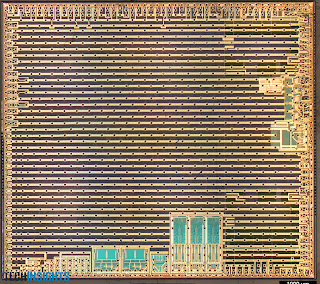 The Qualcomm MDM9600 measures in at a die size of approximately 89.89 mm². This LTE Chipset from Qualcomm’s “Gobi” family of embedded data connectivity platforms is compatible across CDMA, HSPA+ and LTE bands and meets Apple’s needs of having a modem that can switch between 3G and 4G seamlessly. 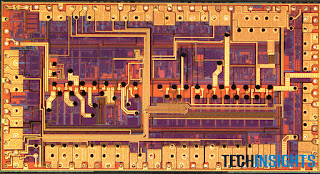 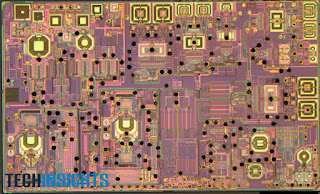 Other devices of interest

Apple is well-known for branding IC’s with their recognizable trademark. Either in an effort to prevent competitors from learning about their design selections, or agreements they have in place with manufacturers, Apple devices tend to have components where the manufacturer is not easily determined. Fortunately, due to our decap process, we can find out the secrets inside these chips. 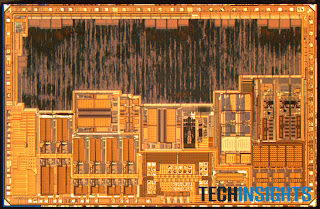 In a surprising discovery, both image sensors found in the new iPad were developed by Omnivision.
Omnivision provides the OV297AA 0.3 MP camera and the OV290B 5 MP Backside Illumination Camera Module.

Finally, confirmed within the new Apple iPad, is another design win for Dialog. The D1974 power management unit makes it the third unique PMU to be used in each generation of iPad.

Apple is known for multi-sourcing its manufacturers of Flash for their products. It could very well be Toshiba in one iPad and Samsung in another. In the case of our iPad, we see the same NAND Flash that we also found in the 16GB model of the iPad 2 from Hynix. This memory package features two 64 Gbit dies to equal 16 GBytes of memory.

The same can be said about other system memory. Other teardowns of the new iPad have shown memory packages from Toshiba. In our iPad, we discovered a Micron multichip memory package. The same case exists for the DDR2 SDRAM that comprises the system memory. Some iPads have seen Elpida devices to make up the 1 GB of Low Power DDR2. Our iPad features Samsung memory. Considering the amount of litigation taking place between Samsung and Apple these days, it’s still surprising how such fierce rivals at the product level can work together at the semiconductor level. All this indicates that Apple has taken a strategy of using multiple suppliers from multiple regions to prepare for any difficulty that could arise in their supply chain. Prior to his appointment as CEO, Tim Cook was well known amongst Apple’s employees for his proactive approach to the Supply Chain. That influence still exists today as seen in the new iPad.

Inside the Apple A5X

Inside the new Apple iPad, or iPad 3, lies a modified A5 processor dubbed the A5X. This modified A5 processor still features two application processor cores and operates at 1 GHz, however, the architecture has been modified to include quad-core graphics. It is stated by Apple to feature the PowerVR SGX543MP4 GPU (the same graphics processor core found in the Playstation Vita). From our decap, right away, you can see that the A5X processor is larger in area than its predecessor. The distinctive die mark also matches that of Samsung-manufactured devices indicating that, once again, Apple has decided to partner with its tablet adversary. 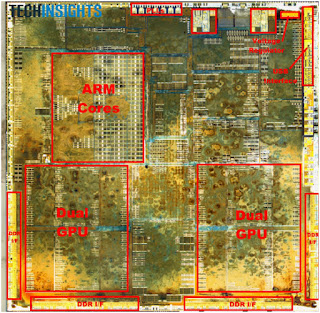 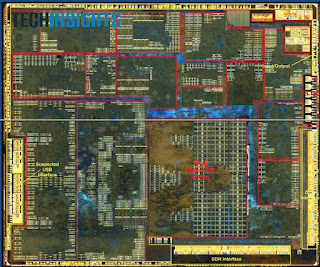