While FinFET Charging Ahead, Other 20nm challenges

While the industry is following Intel's lead with FinFET transistors, there are several additional major problems in continuing semiconductors technology scaling. Some key problems are discussed below.

The hottest topic in the leading-edge silicon foundry world centers around the shift from planar transistors to finFET structures at the 14nm process node.

GlobalFoundries, Samsung, TSMC and UMC are racing each other to develop finFETs at the 14nm node. But the industry is getting ahead of itself, as experts warn there are still enormous IC design and manufacturing challenges at the 20nm process node. The foundries will continue to use planar transistor structures at 28nm and 20nm, with plans to move to finFETs at 14nm.

Some but not all foundries are still struggling to ramp up their processes based on high-k/metal-gate schemes at the 28nm node. While vendors are seeing various challenges at 28nm, the 20nm node is expected to be even more daunting. “It’s a brave new world at 20nm,” said Tom Beckley, senior vice president of research and development for custom IC and signoff for the Silicon Realization Group at Cadence Design Systems Inc.

At 20nm, there are also economic factors involved, namely fab, process and design costs. And there are also technology challenges, such as the advent of double patterning, severe layout-dependent effects, as well as the introduction of a new and third layer of local interconnect in the design.

That layer — or the so-called middle of the line (MOL) — will likely become “disruptive” in the IC flow, said Luigi Capodieci, director of DFM/CAD and R&D Fellow at silicon foundry vendor GlobalFoundries Inc. Capodieci and Beckley were among the keynoters at the 13th International Symposium on Quality Electronic Design (ISQED) in Santa Clara, Calif. on Tuesday (March 20).

Chip scaling enables smaller devices at lower costs, but there are also some major ramifications: Fewer and fewer vendors can participate as the industry marches down to the smaller nodes. Only the players with deep pockets can afford to play at 20nm. It’s simply becoming too expensive for most to play at the bleeding-edge of IC design and manufacturing.

The foundries are seeing a clear trend at the leading-edge. “The number of tape outs is decreasing, but the volumes are much higher,” said GlobalFoundries’ Capodieci during his keynote at ISQED.

From his own data, he said EDA tool costs in total run from $800 million to $1.2 billion for the 22/20nm nodes, compared to $400 million to $500 million for 32nm/28nm. Another troubling trend is verification. “Verification times are exploding,” he added.

The solution to the problem? In the past, circuit designers and layout engineers lived in separate silos. The two groups will need to collaborate in order to deal with the complexities involved at 20nm and beyond, Beckley said.

The IC industry has pushed 193nm wavelength lithography much further than previously thought. Amazingly, on the logic front, the IC industry is using today’s 193nm immersion scanners based on signal-exposure techniques at the 32nm/28nm nodes.

But due to the delays with the various next-generation lithography (NGL) candidates — namely extreme ultraviolet (EUV) — the industry must embrace 193nm lithography and multi-patterning at 20nm and perhaps beyond. Today, Toshiba Corp. and SanDisk Corp. are making 19nm NAND devices using 193nm immersion scanners — and with the help of a resolution enhancement technique (RET) called self-aligned double patterning. Meanwhile, at 22nm, Intel Corp. is using 193nm immersion — with the help of some form of double-patterning technique.

“At 20nm, the foundries will require double-patterning,” said Beckley during his ISQED keynote, but that “brings coloring” into the mix. In double-patterning, the layout patterns are split and decomposed into two masks. The polygons or features are assigned opposite colors.

At 20nm, the foundries will likely embrace a double-pattering technique that involves “litho-etch-litho-etch (LELE),” said GlobalFoundries’ Capodieci. LELE poses some challenges in terms of the composition/decomposition steps and overlay. “Overlay can cause local line width variations or local space CD variations depending on the process scheme, which translates into electrical degradation,” he said.

At 20nm, GlobalFoundries and its EDA partners are working on adding “double-patterning-aware” technologies to solve many of the issues. To get around many of these issues, the IC industry is banking on extreme ultraviolet (EUV) lithography. But EUV is late and is a question mark for 14nm. The problem continues to be the power source and throughput.

At 28nm and above, the manufacturing flow consists of two parts: front-end-of-the-line (FEOL) and backend-of –the-line (BEOL). The FEOL involves the formation of the transistors and logic, while BEOL handles the vias, interconnects and other structures.

At 20nm, the foundries are now talking about a third layer of interconnect. That layer — or MOL — will become another challenge in the manufacturing flow, Capodieci said.

As a result, the industry will require “new methodologies” to address the new routing layer, said Cadence’s Beckley.

Is Moore’s Law slowing down? “The answer is that it is not for the memory and processor IDMs, but definitely for the foundries,” said G. Dan Hutcheson, president of VLSI Research Inc. “The alarming thing about it is that the ability of foundries to convert their process development and tool investments into revenues has been steadily declining since 130nm. The importance of 130nm is that’s when process and design began to be recoupled. The result was the rise of DFM, which didn’t exist before then.” 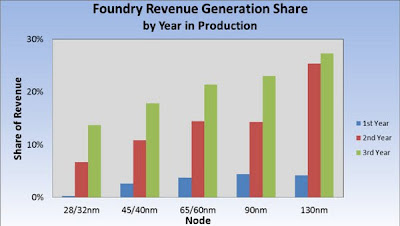 ”What’s more scary about the chart is that the decline is predictable, forming a steady downward trend,” said Hutcheson. ”Meanwhile, the fabless companies at the leading edge, such as Nvidia and Qualcomm are visibly concerned about their foundries’ ability to keep up with Moore’s Law. To stay in the game they need a steady decline in cost-per-transistor. If anything, this chart certainly puts into question the common wisdom that the fabless-foundry model is impenetrable.”

The solution? EDA houses, foundries and fabless chip makers must ”partner more closely,” he said. ”But this comes at a time when the foundries have become more mistrustful, communicating less about upcoming processes. One thing is clear: If these issues don’t get resolved, there will be a major restructuring of the industry.”

Amid these alarming trends, there is also pressure among chip makers to develop more robust designs — and ensure they can be manufactured in a timely fashion. To meet these challenges, IC vendors have recently embraced — and put more emphasis — on DFM. As part of the DFM equation, chips yields — and the yield enhancement process — have become even more critical.

Within that technology, GlobalFoundries has worked with Mentor to develop a flow to boost yields. In another major step to solve the problem, Cadence and GlobalFoundries recently teamed up to reduce the turnaround times for DFM signoff at 28nm. It’s likely that this technology will be migrated to 20nm.

In the DFM world, this is a step in the right direction. GlobalFoundries’ Capodieci said the technology is 10,000 times faster than simulations