Samsung's foundry breakdown shows how much of its business is tied to the iPad, iPhone, and iTouch products. For example, in 2011, Samsung's foundry produced $1.975 billion worth of chips. Apple products were $1.5 billion of the total chips manufactured.


Both Samsung and Apple need to diversify from each other. The high cost of new fabs, current commitments, and the length of time it takes to bring up a new fab is slowing this transition. Intel could potentially be another candidate as a foundry for Apple.

By Mark LaPedus, SemiMD senior editor
The rapid shift towards smartphones, tablets and other products has caused a major change in the foundry business — and overall rankings. Amid the changes, Samsung Electronics Co. Ltd. — and little-known Win Semiconductors Corp. — gained ground in the rankings in the foundry business in 2011, according to IC Insights Inc.

TSMC remained the world’s largest foundry vendor in terms of sales in 2011, followed in order by UMC, GlobalFoundries, Samsung, SMIC, TowerJazz, Vanguard, Dongbu, IBM and Magnachip, according to the firm.

In addition, Taiwan captured the distinction of being the country/region with the largest share of installed wafer capacity in 2011, according to IC Insights. As of mid-2011, Taiwan held 21 percent of global capacity, surpassing Japan (19.7 percent) and Korea (16.8 percent) to take over top spot for the first time. The Americas region with 14.7 percent share and China with 8.9 percent of capacity rounded out the top five, according to the firm.
C.J. Muse, an analyst with Barclays Capital, said foundry capital spending is expected to hit $18.374 billion in 2012, flat from last year.

Not long ago, Samsung was a minor player in the segment. But thanks to its business with Apple Inc., Samsung’s foundry sales jumped by 64 percent in 2011, according to IC Insights. In total, Samsung had foundry sales of $1.975 billion in 2011. Of that, Samsung’s foundry business for Apple represented a total of $1.528 billion, according to IC Insights. 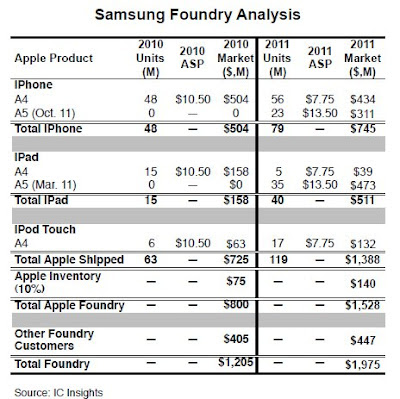 “Samsung was ranked as the fourth largest foundry in 2011 and could challenge for the number three spot over the next few years,” according to IC Insights. “It is estimated that Samsung’s dedicated IC foundry capacity reached 90K 300mm wafers per month at the end of 2011 (50K in South Korea and 40K in Austin, Texas).”

“Using an average revenue per wafer figure of $2,500, Samsung’s foundry capacity has the potential to produce annual sales of $2.7 billion,” according to the research firm.

There are also rumors that Samsung could build another logic fab in Texas as part of a move to keep the Apple foundry business. And for some time, Intel has been also looking at Apple as a foundry customer.
“We believe that Intel’s best chance to make material progress outside of the PC market is to become a foundry and manufacture for Apple. However, Samsung (is) doubling its foundry capacity this year. Thus, we think this opportunity for Intel looks less likely in the future unless Intel changes course,” said Auguste Gus Richard, an analyst with Piper Jaffray & Co.

IC Insights believes Apple must move to another foundry over time. At the same time, Samsung must also expand its customer base. “As Apple begins to engage other foundries (e.g., TSMC) to produce its custom processors, Samsung will need to make up for these lost sales by signing up additional large-scale customers,” according to IC Insights.

“While Apple and Samsung have exchanged lawsuits regarding system level products, Apple is still very reliant on Samsung for its advanced IC processor production (e.g., A4 and A5). It should be noted that TSMC was working at 100 percent utilization in mid‐2011 and essentially had no ability to allocate large amounts of leading-edge production capacity to Apple devices,” according to IC Insights.
“There is no doubt that Apple is looking to diversify away from being so reliant on its major system level competitor (Samsung) for the production of its advanced ICs. However, this transition may be destined to happen over a few years rather than a few quarters,” according to the firm.

Besides Samsung, others are also expanding their fab capacities. As reported, Taiwan Semiconductor Manufacturing Co. Ltd. (TSMC) recently held a groundbreaking ceremony in Taichung’s Central Taiwan Science Park for Phase 3 of its Fab 15 GigaFab. Fab 15, Phase 3 will be TSMC’s second GigaFab equipped for 20nm process technology. The first 300mm GigaFab, Fab 12 module 5, is located in Hsinchu. Capacity for the Fab 15 Phase 3 is 40,000 300mm wafers per month. In the future, TSMC will make 450mm wafers as well as finFETs at 14nm in Fab 15.

Another vendor, GlobalFoundries Inc., is starting off with a bang in 2012: The company’s 300-mm fab in New York has moved into initial production. As part of its major announcement, GlobalFoundries as well as IBM on Monday (Jan. 9) announced an agreement to jointly manufacture advanced chips at both companies’ semiconductor fabs.

As in 2010, GlobalFoundries was third in the 2011 foundry rankings. Semiconductor Manufacturing International Corp. fell one place to 5th in the rankings. Recently, the Shanghai-based foundry vendor announced that David N. K. Wang resigned as chief executive. It also fell into the red in its most recent quarter.

Two other specialty foundries, Vanguard and Dongbu, were next in the rankings. IBM was ninth. “Since IBM’s commitment to the high­‐volume foundry business is uncertain, IC Insights believes that this leaves only Samsung as the primary high volume leading-edge IDM IC foundry of the future,” according to the firm.

Besides capacity expansions, the other trend in the foundry business is clear: consolidation. In 2009, for example, GlobalFoundries’ parent company acquired Chartered Semiconductor, which was then merged into GlobalFoundries. Last year, Taiwan foundry vendor United Microelectronics Corp. (UMC) took a majority stake in Chinese foundry He Jian Technology Suzhou Co. Ltd.

Recently, two Chinese foundries, Shanghai Hua Hong NEC Electronics Co. Ltd. (HHNEC) and Grace Semiconductor Manufacturing Corp. (GSMC) merged. “The combined sales of these two foundries would have been $565 million in 2011, which would have been enough to move the new entity into sixth place behind TowerJazz in the 2011 ranking,’’ according to IC Insights.

The next victim in the shakeout could be LFoundry, a small analog and mixed-signal foundry specialist in Germany that is struggling. In 2008, Japan’s Renesas Technology Corp. sold its fab in Germany – Renesas Semiconductor Europe (Landshut) GmbH (RSEL) – to Silicon Foundry Holding (SFH). 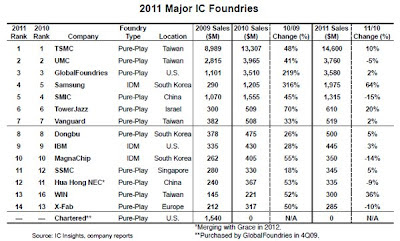 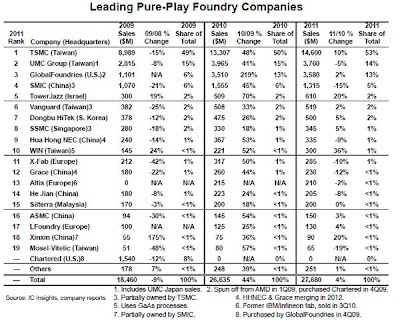 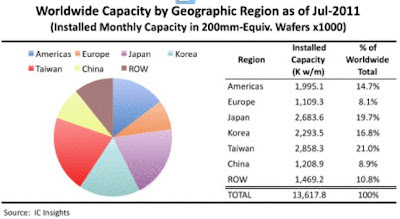