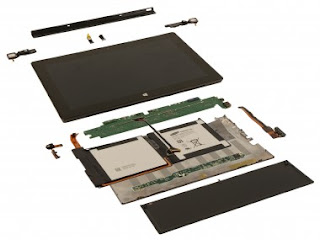 "One big winner with the Surface appears to be Samsung. With one key exception —building the main processor chips —Samsung has been pushed out of Apple's iPad and iPhone products. For the Surface, Samsung supplied the display, the memory chips and the battery, amounting to about $137, or about half of the $271 bill-of-materials (BOM) cost."


You have to credit the folks over at research firm IHS, because, apparently, they’ve pulling a little bit of overtime. Along with the teardown of Apple’s iPad mini, the results of which they sent to AllThingsD yesterday, they also included their first looks inside Microsoft’s Surface and Amazon’s seven-inch Kindle Fire HD.


Let’s get to the Surface first. (That’s a picture of it taken apart, at right.) With a base price of $499 for a 32 gigabyte Surface without the Touch Cover accessory, IHS estimates that the cost of components used to build it amount to $271 for a starter 32GB model, without the cover. The main components include a Tegra 3 processor chip from Nvidia, and a display and memory chips from Samsung. (Of course, Microsoft is probably buying memory chips from more than one vendor.)

Analyst Andrew Rassweiler, who led the IHS teardown team, said that Microsoft is using the relatively low entry price as a base, in hope of enticing consumers to buy higher-end models with the Touch Cover and higher memory capacity. The Touch Cover, which my colleague Walt Mossberg liked in his review of the Surface, costs $120 when purchased separately, and is bundled with the higher-end models.

Rassweiler estimates the cost of the parts used to build the Touch Cover at about $16, making it appear to be pretty profitable. It contains chips from Atmel and Freescale Semiconductor, he says. “It’s a compelling accessory for users to have, and a great example of a way in which manufacturers get consumers interested with a base price, and hope they’ll impulsively opt for extra features that make more profit,” he told me. Accessories always have higher profit margins than the devices they are intended to be sold with, Rassweiler says, and protective cases for phones and tablets always tend to sell well.

One big winner with the Surface appears to be Samsung. With one key exception — building the main processor chips — Samsung has been pushed out of Apple’s iPad and iPhone products. For the Surface, Samsung supplied the display, the memory chips and the battery, amounting to about $137, or about half of the $271 bill-of-materials (BOM) cost.

Now, on to the Kindle Fire HD. (Seen in its exploded view at right; click to make bigger.) Recall that the last Kindle Fire to get the teardown treatment came in with a cost estimate of $202 (later revised down to about $187) against a retail price of $199, meaning that Amazon was close or near to losing money on the hardware, and was hoping to make it back on the sale of content from its digital store, and even on sales of physical goods from its retail store. One estimate earlier this year suggested that Amazon makes more than $100 off each Kindle Fire. It’s probably pretty close to breakeven, if slightly profitable this time around, Rassweiler told me. Amazon CEO Jeff Bezos has said the devices are sold at cost.

Like the old one, the new Kindle Fire HD sells for a starting price of $199, and carries a combined cost of components of $165, according to IHS estimates. Key suppliers are LG Display, which made the screen; Texas Instruments, which repeated its role as the supplier of the main processing chip, plus power and video chips; and Samsung, which provided the memory.
Posted by Ron at 6:36 AM