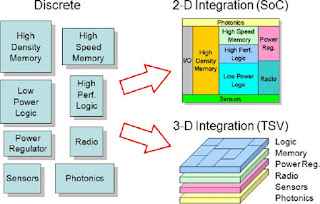 Some of the key issues in the upcoming IDEM 2012 are discussed in "Intel, rivals gird for IC manufacturing showdown" and in "IEDM preview: 20nm and below" .


"There have been three primary drivers in the semiconductor industry for the last four decades: Area, power/performance and cost. The well-known push to cram more functionality onto a single chip through continued scaling -- or into a single package through 3D integration and other advanced packaging techniques -- has been well documented. Today, with the exception of Intel, the industry's leading edge devices in high volume manufacturing have critical dimensions of 28nm. Intel, racing ahead, introduced the 22nm IvyBridge chip in 2011 and has announced plans to have 14nm by the end of 2013. How long this kind of scaling can continue is the subject of some debate, with most recognizing the EUV lithography will be required at some point, most likely for the 10nm generation (Intel has said it doesn't need it for 14nm).

It's clear, though, that continued scaling is running out of steam..."   Ron   www.maltiel-consulting.com
Posted by Ron at 11:44 AM