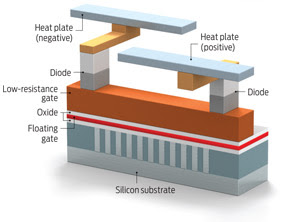 A new development by Macronix has the potential of extending flash NAND memory technology for several additional generations.

Macronix's new heat treatment that heals the memory cell can impact other layers in the memory cell. For example, it can change electromigration properties of metal lines nearby. It can also produce mechanical stress around the heat spots. The impact of the heat treatment has to be optimized, since the potential of creating larger flash memory looks promising. Already Macronix will present a flash memory chip with 6 bits per cell at the 2013 ISSCC.