Fabless Catching Up to IDM Sales 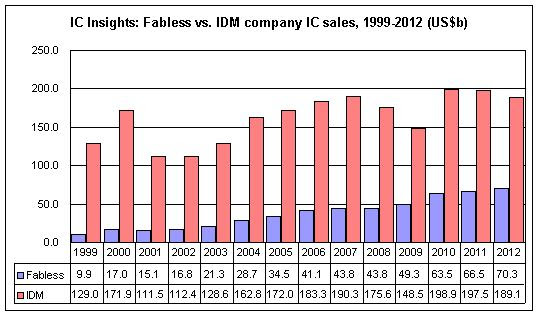 Fabless semiconductor companies continued to increase their shares relative to IDM sales in 2012 as the graph shows.


More about it from IC Insights is below.

Contrary to some opinions, the fabless/foundry business model shows no signs of "collapsing."
IC Insights’ 2013 edition of The McClean Report shows that the fabless IC suppliers grew by 6% in 2012, 10 points better than the 4% decline registered by the IDMs (i.e., companies with IC fabrication facilities) and eight points better than the 2% decline shown by the total IC market last year.

The year 2010 was the first and only time on record that IDM IC sales growth (34%) outpaced fabless IC company sales growth (29%). Since very few fabless IC suppliers participate in the memory market, they did not receive a boost from the surging DRAM and NAND flash memory markets in 2010, which grew 75% and 44%, respectively.

Another reason for relatively poor showing by the total IC fabless segment in 2010 was that some of the large fabless IC suppliers like MediaTek and ST-Ericsson, registered growth that was less than half the total 2010 IC industry average. However, the fabless IC suppliers once again grew faster than the total IC market beginning in 2011 by registering a 5% increase as compared to a 1% decline in sales for the IDM companies.

Figure 2 compares fabless-company IC sales to IDM-company IC sales since 1999. As shown, the 1999-2012 worldwide IC market displayed a modest 5% CAGR. In contrast, total IC sales from the fabless IC companies during this same timeframe increased at more than three times this rate and registered a very strong 16% CAGR. As a result of this trend, fabless IC company sales increased over 7x from 1999 to 2012 whereas total IDM IC sales were up less than 50% over this same timeperiod. Moreover, the IDM companies’ IC sales in 2012 were only 10% greater than they were 12 years earlier in 2000 and were less than they were five years ago in 2007. 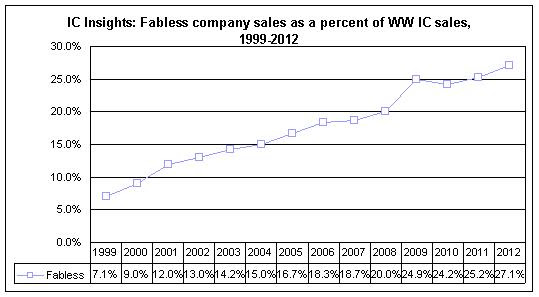 
IC Insights forecasts that in 2017, fabless IC companies will command at least one-third (33%) of the total IC market (especially if more large companies like IDT, LSI Logic, Agere, and AMD become fabless over the next five years). Over the long-term, IC Insights believes that fabless IC suppliers, and the IC foundries that serve them, will continue to become a stronger force in the total IC industry.
Posted by Ron at 8:09 AM