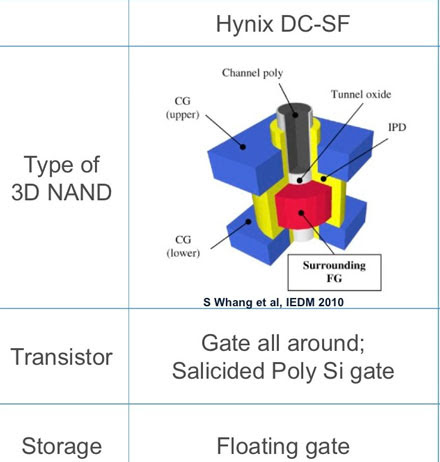 3-D Flash starts to appear in the market. Hynix version is based on VSAT technology.


See more about VSAT at http://www.maltiel-consulting.com/3D_Charge_Trapping-CT_NAND_Flash.pdf .


The dramatic iincrease in flash memory cycling endurance (mentioned in IEDM 2012) is likely to extend the life of the basic flash NAND technology.

South Korean memory semiconductor supplier SK Hynix said earlier this week that it would begin mass production and sampling of 3D flash memory chips that utilises vertical-stacked-array-transistor (VSAT) technology, according to a report by the Korea Times.

Flash chip, which is a type of non-volatile memory that can be erased and reprogrammed, is ideal for data-intensive devices that constantly connect to the Internet. It has a simple cell structure that allows for higher memory capacity, density and durability.
"As far as I know, all major semiconductor companies are investing more in the development of 3D flash memory chips. SK Hynix is trying hard to mass produce them as early as possible," said CTO Park Sung-wook. Samsung Electronics is reportedly planning to produce 3D flash memory chips in its plant in Xi'an, China upon completion of the facility.
Posted by Ron at 9:10 AM