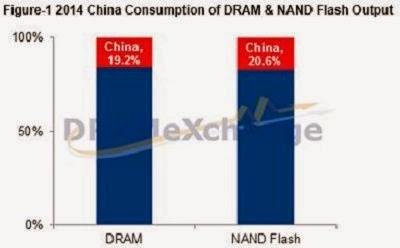 China's efforts over the years to transform from a manufacturing-based to consumption-based economy has been largely successful. Given the consistent growth in its economy and the country's rising wage levels, many of the productions in China are bound to be outsourced to other emerging countries. The Chinese government's present goal is to improve the country's outlook by implementing strategic policies that are aimed at enhancing its industrial capabilities. One such policy involves increasing the imports of semiconductor components such as smartphone CPU, AP, DRAM and NAND Flash, the combined value of which exceeds the value of China's imports for oil. In the future, it would be interesting to see whether Unisplendour Corp. Ltd's (UNIS) efforts to integrate resources from Spreadtrum Communications, RDA and Intel will be successful.
Due to the relatively high proportion of CPU, DRAM and NAND Flash components imported by China, the government policies that are implemented with regard to these three product categories may prove critical to the country's industries. A few days ago, the Chinese government announced a policy worth nearly $20 billion that involves mastering the technologies at the upper streams of the country's semiconductor supply chain and applying these technologies to mid to lower streams. The main purpose behind this is to enable the country's supply chains to be more integrated and to allow momentum in China's domestic industries to persist.
Posted by Ron at 6:46 AM