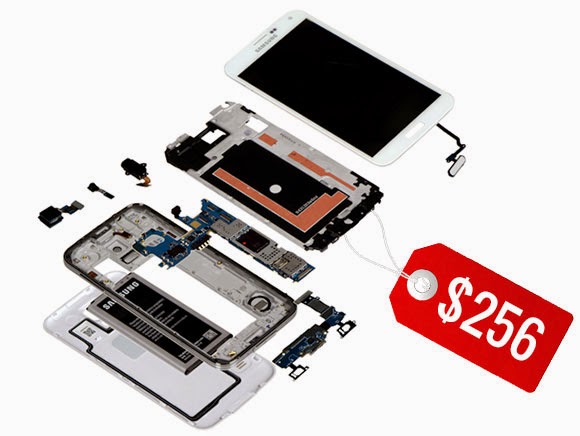 IHS released a teardown of Samsung’s Galaxy S5, the estimated bill of materials of $256 BOM keeps going up from previous cell phone generations. See more in the article below;

While "the iPhone 5S had a BOM of $191 when it launched last September, while the iPhone 5C had $173 worth of components inside its unapologetically plastic body."

Like in Apple's phone DRAM and NAND are a high cost items and as semiconductor manufacturing advance along its learning curve it will increase Samsung margin.

Ron
Insightful, timely, and accurate semiconductor consulting.
Semiconductor information and news at - http://www.maltiel-consulting.com/
$256, priciest Galaxy S to date
Research firm IHS got hold of Samsung’s new flagship smartphone and took it apart to the last bolt to figure out how much it actually costs to build. According to the teardown, the Galaxy S5 has a bill of material (BOM) of $256.
Of course, this is not the full cost of the device, as it does not cover logistics, R&D, marketing and a range of other expenses that Samsung has to cover before the device makes it to retail.

The $256 figure sounds a tad too high. Most flagship phones tend to have a BOM of about $200 or less. Most iPhones usually end up south of $200. For example, the iPhone 5S had a BOM of $191 when it launched last September, while the iPhone 5C had $173 worth of components inside its unapologetically plastic body.
The Galaxy S5 retails for $699. Samsung does not have as much room to jack up margins as Apple does on the iPhone 5S, but it still has quite a bit more than many manufacturers. What’s more, Samsung’s BOM keeps going up. IHS found that the Galaxy S3 had a BOM of $205, while the S4 ended up at $233 (LTE version with Qualcomm 600 SoC). On top of that, a Galaxy S series phone costs upwards of $8 to assemble.
High-end smartphones are pricey, but at least it’s nice to see that Samsung’s consumers get a bit more value for money with each new generation.

Unsurprisingly Samsung’s 5-inch 1080p display is the most expensive component in the Galaxy S5. IHS puts its cost at $65. The cost of DRAM and NAND memory is around $33, but it’s unclear how much the Snapdragon 801 SoC costs. IHS puts the price of the Snapdragon 600 used in the S4 at $20, while the big Exynos 5 was estimated to cost $30. The Snapdragon 801 is probably closer to the Exynos in terms of overall cost.
“Inside we see mostly a lot of recycled components that we’ve seen before. There’s really nothing special inside where Samsung is pushing the envelope,” IHS analyst Andrew Rassweiler toldRe/code. “There’s no breakthroughs, there’s nothing earth-shattering. It’s really just a continuation of what has come before.”
However, although there are no breakthroughs, the Galaxy S5 features a few new sensors, including a $4 fingerprint sensor and a biosensor from Maxium, with an estimated cost of $1.45. In addition to the new components which were not used in previous Galaxy S phones, the S5 also features a somewhat sturdier body, which also happens to be waterproof. This probably added a few more bucks to the BOM.
Posted by Ron at 10:58 AM