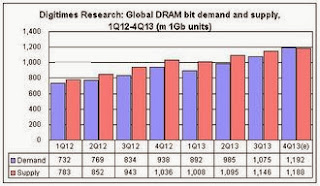 Hynix DRAM production was mentioned in an announcement of introduction of the 64Gb (gigabit) multi-level cell (MLC) NAND FLASH using the 16-nanometer micro fabrication process technology.
“The equipment, not directly damaged by the fire, requires a lot of work before it can be used again in the production line,” said an industry official. “It will not be as easy to normalize the Wuxi plant as originally thought.”


Fab equipment has to be meticulously cleaned before it can be put back in production. You have to make sure running the equipment would not produce particles. In addition every piece of equipment impacted by the fire need to be recalibrated.


Hynix also mentioned:
"SK Hynix raised the production capacity of the Icheon DRAM plant by 30% after the fire in the Wuxi plant in China. Early next year the company is considering making additional investments to extend the Icheon plant."


I am not clear how they can raise production 30% very quickly. They can shrink product masks set, improve production process, or buy new equipment. Each one will take several months to implement.