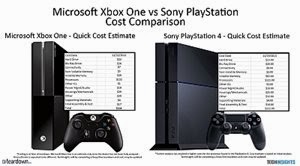 TechInsights Teardown (see below) shows that both vendors used many similar parts to optimize their investment in the next generation of gaming consoles.


Based on iFixit tear down I believe that the tear down has a minor error that would add about $3 to Xbox cost of manufacturing due to the 8GB EMMC NAND flash being used instead of:


"Xbox One also has 4GB eMMC NAND flash, making the non-volatile category US$3 higher for Xbox One"


Based on iFixit disassembles the Xbox One and finds NAND


"One interesting component is an 8GB chunk of eMMC NAND flash memory, the purpose of which Microsoft discussed last month with Eurogamer. In the words of Microsoft Technical Fellow Andrew Goossen:


We use it as a cache system-side to improve system response and again not disturb system performance on the titles running underneath. So what it does is that it makes our boot times faster when you're not coming out of the sleep mode—if you're doing the cold boot. It caches the operating system on there. It also caches system data on there while you're actually running the titles and when you have the snap applications running concurrently. It's so that we're not going and hitting the hard disk at the same time that the title is. All the game data is on the HDD. We wanted to be moving that head around and not worrying about the system coming in and monkeying with the head at an inopportune time.”

TechInsights has performed a Quick Turn Teardown of the Sony PlayStation 4 and the Microsoft Xbox One.
TechInsights Teardown shows that both vendors used many similar parts to optimise their investment in the next generation of gaming consoles.
While AMD came out as a big winner in the APU (integrated CPU and GPU) there are choice design differences around the both the processor design and the use of memory in each device.
The TechInsights bill of materials (BOM) for the Microsoft Xbox One amounts to US$331.00. Based on this – and when the estimated costs for the peripherals are included – TechInsights believes Microsoft will have a gross profit of approximately US$100.00 per console sold. This is far better than the US$43.00 Sony will make per complete unit.
Says Al Cowsky, Costing Director, TechInsights: “At the console level, the Xbox One is US$10 less expensive than the PS4. This is primarily due to a US$23 memory premium on the PS4, but it is offset by an US$11 cost premium on the Xbox One processor.
"The Xbox One also has 4GB eMMC NAND flash, making the non-volatile category US$3 higher for Xbox One, while the housings/mechanicals of the Xbox One add another US$4 premium over the PS4.
"The Xbox One also comes with a Kinect vision system in-box with an estimated cost of US$39. This is more than made up for by the US$100 list price premium. Likewise, PS4 has an optional vision system accessory available for a list price of US$60 (unit not costed at this time)”