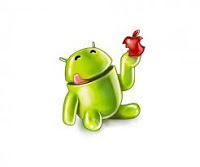 The article below shows that Apple is slipping in smartphone market share. Is this a key reason for Apple lawsuit of Samsung about their patents ( Apple-Samsung Patent Battle Shifts to Trial ) .

iPhone market is a captive market, people who bought iPhone in the past upgrades to new one when a newer model comes out. It would make sense that iPhone sales are slowing down as we get closer to new  model. After the introduction of the new model Apple will catch up to Samsung.

Shortage of 28 nm wafers will not impact Apple.  Apple does not push semiconductor processing leading edge too hard. See for example their usage of 32nm in Samsung fabs for A5 processor.

Issues with 28nm process availability will have impact on Apple vendors such as Qualcomm (see in my June blog Samsung, Qualcomm: New Foundry Business Model .

"It could be that people are holding off from acquiring Apple iPhone's because of rumors the iPhone 5 is going to launch in September. However, if that launch gets pushed back due to a shortage of 28-nm silicon Apple could be left with egg its face"

LONDON – Samsung Electronics Co. Ltd. has regained the lead in the smartphone market in 2Q12, six months after losing out to Apple, according to market research firm IHS-iSuppli (El Segundo, Calif.).
Samsung's sales rose 5 percent to 36 million units, up from 34 million in the first quarter. Meanwhile, Apple suffered a 26 percent decline in shipments to 26 million units, down from 35 million in the first quarter, according to the market research firm.

It could be that people are holding off from acquiring Apple iPhone's because of rumors the iPhone 5 is going to launch in September. However, if that launch gets pushed back due to a shortage of 28-nm silicon Apple could be left with egg its face.
While the other smartphone companies disclose exact shipment numbers for overall cellphones and smartphones, Samsung doesn’t provide precise figures, instead offering general guidance. Because of this, IHS estimates the Samsung cellphone and smartphone shipment numbers.
Wayne Lam, senior analyst, wireless communications, for IHS, said that by the end of the second quarter, there were about 3 million iPhones in the sales channel that had not been sold to consumers. He said he expected Apple's sales to bounce back once the iPhone 5 goes on sale.
Smartphone shipments from Nokia declined by 14 percent in 2Q12 to 10 million units, down from 12 million in 1Q12. The fact the Symbian based cell phones are still outselling Windows-based Lumia phones indicates that Nokia is a long way from turning the company around, said Lam. 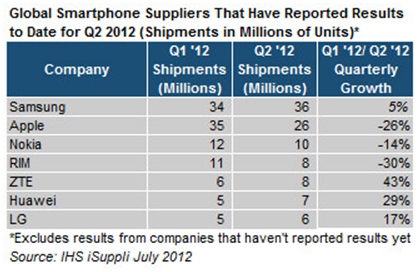 "With the Galaxy SIII, Samsung launched the Samsung Music Hub featuring its own music streaming and download service in which the consumer has a direct billing relationship with Samsung," said Daniel Gleeson, mobile media analyst for IHS, in a statement. "Samsung is trying to replicate the strong loyalty iPhone users have to Apple's phones, ensuring a solid base for future sales. While almost all Android manufacturers try to provide some user-interface differentiation to add value to their brands, this is one of the first instances of a smartphone manufacturer directly offering consumers a service."
Posted by Ron at 9:04 AM