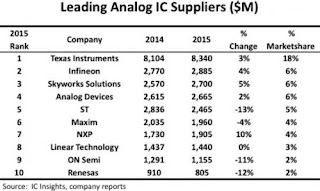 Semiconductor companies continue to merge in 2016. The latest is Analog Devices buying Linear, to boost its profitability and increase its share in the fragmented market for analog chips, which process signals such as sound, light and temperature and convert them into digital signals. The chips are central to smart phones and devices connected to the internet

Linear products are mainly in 44% industrial, 24% transport, and 18% in high-growth communications. In its transportation business, Linear is the leader in BMS (Battery Management Systems) for electric cars. Specifically, Linear is the brains behind the failsafe mechanisms that keep your electric car from just stopping because the battery died.

A list of previous mergers and acquisitions is at Update:China 2015/2016 Semiconductor Mergers, Acquisitions

A key reason for all these merger and acquisitions is the growing cost of semiconductor fabs (see March 2012 blog - Moore's Law End? (Next semiconductors gen. cost $10 billion)),

More about Analog Devices buying Linear the article below

Dylan McGrath
7/26/2016 05:22 PM EDT
SAN FRANCISCO—Analog Devices Inc. (ADI) will acquire rival Linear Technology Corp. in a cash and stock deal worth about $14.8 billion, the companies said Tuesday (July 26).
The deal, which remains subject to stockholder approval, would bring together two analog semiconductor powerhouses and would be the latest in a string of blockbuster semiconductor deals over the past few years.
Under the terms of the deal, ADI will pay $46 and 0.23 shares of ADI for each share of Linear Technology common stock, the companies said. The transaction values Linear at $60 per share, a premium of about 24% over its closing price of $48.47 Monday.
ADI ranked fourth in analog chip sales in 2015,, which Linear clung to the No. 8 position, according to market research firm IC Insights. Combined, the two firms held about 9% of the analog IC market in the first quarter, according to IC Insights.

Vincent Roche
Analog Devices
“We believe this is the right deal at the right time in the analog industry,” Vincent Roche, ADI’s president and CEO, said in a conference call Tuesday.
While ADI and Linear Technology are both top 10 analog chip vendors, the two firms have complementary product portfolios, according to Steve Ohr, a longtime analog semiconductor analyst and journalist.
Most of ADI’s $2.67 billion in 2015 revenue came from data converters, Ohr said, with only about $150 million to $200 million from power management ICs. Linear is strong in power management chips, Ohr added.
“Power management is a place where Analog Devices is lacking, and Linear is very strong in power management,” said Ohr, who currently writes for EE Times. “It [the deal] actually build's Analog Devices' product offerings very well.” 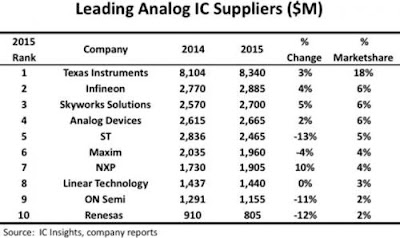 The semiconductor industry has been in the midst of an unprecedented wave of consolidation for more than two years. In 2015 alone, the value of semiconductor industry merger and acquisition deals exceeded $100 billion. Blockbuster deals consummated during this period have included Avago Technologies Ltd.’s $37 billion acquisition of Broadcom Corp., Intel Corp.’s $16.7 billion acquisition of Altera Corp. and NXP Semiconductors NV’s $11.8 billion acquisition of Freescale Semiconductor Inc., among others.
Linear’s stock price shot up by nearly 30% in trading Tuesday on news of the deal, which was first reported by the Bloomberg news service earlier in the day.
Roche will continue in the same role with the combined company, ADI said. David Zinsner, ADI’s chief financial officer, will continue to serve as CFO of the combined company, the firm said. The company added that it expects to create a “leadership team with strong representation from both companies across all functions.”
Bob Swanson, Linear’s co-founder and executive chairman, said through a statement that Linear’s board of directors concluded that after 35 years of growing organically the ADI deal would deliver substantial shareholder value and the potential for additional upside.
"By combining our complementary areas of technology strength, we have an excellent opportunity to reinforce our leadership across the analog and power semiconductor markets, enhancing shareholder value,” Swanson said.
The deal is expected to close in the first half of 2017.
Ohr said that ADI has for the past couple of years emphasized its military and industrial electronics product lines. Linear, on the other hand, tends to market “high-end building blocks” such as data converters and power amplifiers that are “so well made you can’t exactly consider them commodities, Ohr said. “That expands Analog Devices’ library of standard products components,” he added.
—Dylan McGrath covers the semiconductor industry for EE Times
Posted by Ron at 7:20 AM