Silicon Motion controllers gain acceptance and is integrated by Hynix, SanDisk, and maybe by Intel (see below).

We were privileged yesterday to meet with Robert Fan, Vice President and General Manager of Silicon Motion to discuss their latest SSD controller, the SM2256, which features support for TLC NAND.  Historically, TLC NAND has had a reputation of having low endurance and reliability, and hence was not suitable for use in solid state storage devices.  Fast-forward to today, and we are seeing new technology and software/firmware tools that are able to increase both the reliability and endurance of TLC NAND, now making it a viable alternative to the more expensive MLC NAND for use in certain SSDs.

The SM2256 supports a wide variety of NAND chips, including ONFI 3.0, toggle 2.0 and asynchronous NAND.  It also supports the latest process geometries, including 1x, 1y, and 1z NAND from all major NAND suppliers, and includes 3D NAND.  The SM2256 is a 4-channel controller, yet offers performance that rivals that of 8-channel controllers.  It supports up to 32 NAND devices, which gives it the capability to support up to 1TB of flash storage.  The SM2256 also features a 16-bit wide DRAM interface at DDR3/DDR3L speeds.


As an OEM solution, the SM2256 offers controller and firmware from a single source, simplifying its usage.  The firmware is both customizable and upgradeable. The SM2256 supports both device sleep mode (DevSleep) and PHY sleep mode (CFast PHYSLP), as well as TRIM functions.  It also features S.M.A.R.T. drive performance and health monitoring attributes.

In the above image, we see a trio of engineering samples that are utilizing the Silicon Motion SM2256 with various NAND configurations. In the close-up shot below, we see the SM2256 residing on the PCB of a 512GB SSD utilizing 19nm TLC NAND and a 512MB DDR3 DRAM chip from Hynix. 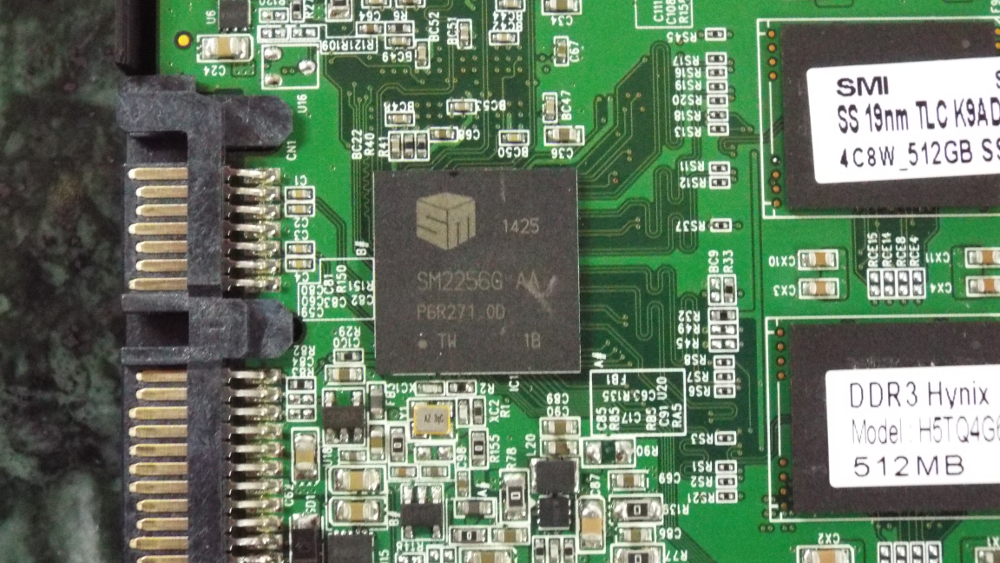 Silicon Motion has enjoyed widespread adoption of their previous SM2246 controller, which is being utilized by over 30 OEMs as shown in the graphic below. For additional information click on “SM2256″ in the selection guide here at Silicon Motion’s website.  This will take you to the product page for the SM2256.

This week, SanDisk announced the new SSD Plus that is priced less than $70 in 128GB. The SSD Plus won't break any performance records but is clearly designed to break price barriers. SanDisk didn't brief media before introducing the SSD Plus at Storage Visions 2015, but since that time we've learned that Silicon Motion is inside with a custom variant of the SM2246EN controller.

Getting one NAND fab company to use your controller is a big step for a controller maker that was virtually unheard of one year ago. Getting two is big news for investors. Just days after the SanDisk announcement, Crucial, a division of Lexar and also a NAND flash manufacturer, announced the new BX100. Again, this new low cost consumer SSD with 16nm MLC flash is managed by a Silicon Motion SM2246EN controller.

They say when it comes it comes in threes. Analysts have recently come forward to state that Intel, a partner with Micron/Crucial/Lexar, has chosen a Silicon Motion controller for an unannounced consumer SSD that should break cover in the coming months. Most likely Intel will brand the new product in the 300 Series family, a low cost series that again is designed to increase the adoption rate of solid state storage technology, replacing mechanical hard drives.

None of this is all that radical when you know the history of the SSD market. SandForce quickly came to power but acquisitions and long product delays have left the door open for Silicon Motion to get a foot in the door. Now that Silicon Motion is sitting at the table, we think the real objective is for the company to use SM2246EN as a stepping stone for SM2256EN, a flash controller that takes advantage of new 3bit per cell technology that will further reduce the cost of solid state storage technology to consumers.
Posted by Ron at 8:35 AM