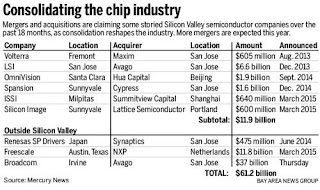 The trend is due to

1. The increasing cost of developing the next generation of semiconductor chips (see Feb 2013 blog SemiconductorMoore's Law Running out of Money )

The table below summarizes the key mergers and acquisitions of semiconductor companies announced since 2015. Before 2015 there was typically about one merger each year.

So far, the mergers and acquisitions directly impacts wafer fabs capacity only for Altera that was bought by Intel. It is likely that China will try to increase its fabrication capacity.

Most of these deals have not yet gotten regulatory approval and could be cancelled before the deal closes. I will attempt to update the table as these transactions proceed.

Ron
Insightful, timely, and accurate semiconductor consulting.
Semiconductor information and news at - http://www.maltiel-consulting.com/
Posted by Ron at 8:48 AM